Rocha has lent her signature designs to H&M in a collection for women, men and children 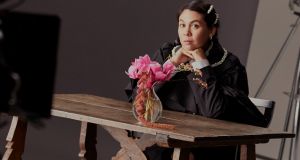 Simone Rocha: ‘Creatively I feel the same as I did 10 years ago – inspired, challenged and pushed. That’s part of having a craft and that’s my life and I feel privileged.’

“This has been a joy to do with creatively complete freedom,” Simone Rocha tells me on the phone from London discussing her highly publicised collaboration with H&M, a first for an Irish designer. She joins some of the biggest names in fashion from Comme des Garcons and Margiela to Lanvin and Stella McCartney who have collaborated with the Swedish giant on once-off collections since 2004. It goes on sale worldwide on Thursday, March 11th – solely online and not in selected stores as previously announced.

Widely welcomed for the designer’s recognisable silhouettes, styles and distinctive fabrications at affordable price points – dresses and trench coats are €179 for example – it also includes menswear and childrenswear for the first time with the same visual vocabulary and flourishes that are very much the Rocha signature.

For women there are big skirted floral and lace dresses, tulle tops with bow details and reimagined trench coats. Accessories include crystal chandelier earrings, brogues with pearl detail, and feathery flats that recall the aesthetics of previous womenswear collections.

All feature Aran cable knits. For children there are printed tees, little pink dresses, quilted Chinese-style jackets, tartan dungarees, satin shoes and colourful socks. For men, trim trousers, sweats and blazers. “They reflect my codes which are both masculine and feminine, a cross-pollination of fabrics between him and her and trickling down to childrenswear. It’s a collection for the whole family, for everybody, for all ages, so it was very important to do,” she says.

Completed before the pandemic, it involved reflections on past seasons’ designs marking the 10th anniversary of her label. “Those 10 years have flown by and I hope to have another 10. The fact that we have included menswear and childrenswear are areas we are hoping to explore further. Creativity becomes your life in whatever shape [it takes] whether in furniture or other areas of design,” she says. Production was delayed because of Covid while her spring mainline show took place in September with a socially distanced presentation at an art gallery in London.

“We were very fortunate to be able to get through [the pandemic] – no one on my team got sick. It has been an interesting time, but it has also had an amazing side and we have had to deal with various versions of lockdown, but we do still get to work in the studio with a skeleton staff because they can’t work from home,” she says.

Home, where she lives with her cinematographer husband Eoin McLoughlin and their five-year-old daughter Valentine, is in Dalston, east London from where she cycles the short ride to De Beauvoir town to her studio, a bright open building overlooking Regent’s Canal. Lockdown has meant homeschooling “which is mad because I was the worst student at school” (in Alexandra College), she says with a laugh.

Family and her Chinese-Irish background have always been important to her. “We are ridiculously close,” she said recently. Her love of gardening and flowers (floral decor is a familiar theme in her work) is matched by her brother Max’s culinary skills and their cross-pollination of ideas. Max, a former collaborator on the music for her shows, had been working as a chef in the acclaimed River Café restaurant on the Thames until its enforced closure due to the pandemic. Since then, he has been cooking for Simone and their parents, John and Odette, at their central London home.

Rocha’s cultural references have always been wide and are reflected in her collections, common to all being their emphasis on craftsmanship and whimsical detail. Winter 2020 referenced JM Synge’s Riders to the Sea with its ceremonial wraps, veils and Aran knits while the smaller 10-piece spring 2021 collection with its broderie anglaise and jewel-bedecked bosoms alluded to a famous portrait of Nell Gwynn, mistress of Charles 11.

“My last physical show was winter 20, the last time in a room, a collection that was quite end of worldly, inspired by the turbulence of nature and the sea – it was quite serendipitous. When times are so troubled you can only hope to come out of them and bring something positive. It was a play on escapism and things being free and the collaboration and collision of fabrics,” she says.

She herself is the best advertisement for her designs – usually clad in big skirts and blouses, furry mules and jewellery. Jeans and tight trousers are not her style. A voracious reader and consumer of books on art and photography with a huge library in her office, she is enjoying Naoise Dolan’s Exciting Times, which has a particular resonance for her as it is set in Hong Kong, her father’s native city.

She is “obsessed” with Wicklow-based Irish artist Genieve Figgis and her fairytale narratives and painted tableaux and thinks her work incredible. The lockdown has also enabled her to reread Edna O’Brien’s The Country Girls.

As a designer who has always been inspired by the French-American artist Louise Bourgeois since her exhibition in IMMA in 2003, Rocha has said that clothes are made of cloth and of emotion, come to life on a body and tell a story. “I use a lot of tulle, gossamer laces and delicate fabrics and ground them with practical heavy shoes,” she says.

That mix of realism and fantasy lies at the heart of her collections which express a strong and powerful contemporary femininity that resonates with women worldwide. She put pearls on the map – “stones of the sea” – for example, that are now widely copied. Her catwalk shows have illustrated an approach to inclusivity regularly employing women of varying ages and styles as models – memorably one at Alexandra Palace with Olwen Fouéré, Jessie Buckley and Charlene McKenna.

The precision of detail and workmanship so notable in all her work is also reflected in the control she exerts over every aspect of her business as an independent female entrepreneur, a calm, firmly-in-control authority being a characteristic she has inherited from her mother, Odette.

Has success changed her? “I don’t feel that it has. You want to inspire people and create work that makes people feel good and tell a story and how that all translates. I now have my own family and I love my studio and atelier and creatively I feel the same as I did 10 years ago – inspired, challenged and pushed. That’s part of having a craft and that’s my life and I feel privileged,” she tells me.

While her stores in New York and Hong Kong remain open, her London shop is closed and selling only online for the present. Next week her autumn/winter 2021 collection will be shared digitally with a global audience at London Fashion Week and a fortnight later, the H&M collection will be unveiled for sale, keeping her name firmly in fashion’s spotlight.

Though the collaboration with H&M has been widely welcomed, reaction to its announcement in January was tempered by complaints on social media about its sizing given that the average UK (and Irish) size is now 16. H&M responded saying that garments offered in L (large) was equivalent to UK 16-18 “but not including all sizes as communicated in the video”. Broadcaster Louise McSharry, who has been highly vocal on the issue and feels excluded, argues that this is simply not consistent with the rest of H&M’s sizing. “On their social media they claimed that L was 42 which is a UK14,” she says.

In view of this, Rocha’s claim that the collection is “for women of all sizes” rings a bit hollow though it is worth noting that in online sites like Netaporter and Matches, her clothes go up to only a size 14.

In the meantime, with Brexit complications in force, H&M has announced that distribution has been moved to the Netherlands from the UK “which means that products sold in Ireland won’t be charged with additional duty due to Brexit”.