‘Sexy’ Halloween costumes: when it comes to women, scary doesn’t cut it

Halloween might be your only chance to choose from ‘sexy’, ‘sexier’ or ‘phwoar’ 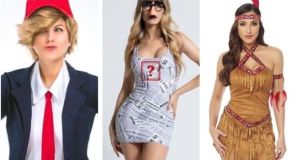 It can be hard to get it right at Halloween. On the one hand, fashioning a witch’s hat out of cardboard, and slashing a hole in a bin bag and calling it a cape, doesn’t really cut it anymore. On the other, there is such thing as trying too hard.

This year’s “missing the point” award was snapped up weeks ago by online retailer Yandy, which took a glance at the headlines that dominated 2018, and decided that a sexy Handmaid’s Tale’” costume would be the perfect way to celebrate one year of #MeToo.

“An upsetting dystopian future has emerged where women no longer have a say. However, we say be bold and speak your mind in this exclusive Brave Red Maiden costume,” the description on the website trumpeted. There was a predictable tweetvalanche of protest, and the manufacturer withdrew the costume, insisting that it had been misunderstood – it intended the sexy Handmaid get up to be seen as “an expression of women’s empowerment”, bless its innocence.

But a perusal of this year’s online offerings reveals that no, “sexy” and “Halloween costume” still go together like apple bobbing and norovirus outbreaks. The online websites offer multiple categories, from “icons” to “schooldays” to, yes, “sexy”, but don’t be fooled. If you’re a woman shopping online for a Halloween costume, your choice boils down to “sexy” or “even more sexy” or “phwoar”.

Look, there’s nothing wrong with sexy Halloween costumes if that’s what you want to do – and clearly lots of people do, even if, according to Google Trends, internet searches for sexy Halloween costumes peaked in 2008, and has been on the wane since. Ireland still comes fourth in the world rankings of searches for the term, behind Myanmar, USA and Canada, and ahead of Pakistan.

So if you’ve always secretly fancied yourself as a sexy corn on the cob, or a sexy crayon, or even a sexy poop emoji – yes, that’s a thing – Halloween might be your only chance and we’re not about to talk you out of it. There is, however, a fine line between witty, zeitgeisty, and still quite sexy cultural references, and costumes that are crass, culturally insensitive, unnecessarily objectifying, or just plain baffling – and here, from the darkest corners of the internet, is our pick of the costumes that manage to stray onto the wrong side of it.

1. Take a topical news story and add the word sexy

Taking a trending news story and adding the word sexy to the front of it is a popular approach every year. Two years ago, we had “sexy Mexican border wall”. This year, it’s all about “sexy fake news” and “sexy anonymous New York Times op-ed”. Clever, and yet still somehow tawdry.

To be fair, though, the thought of Donald Trump in hotpants is genuinely frightening, so hats off to whoever came up with this.

As inspiration goes, this couldn’t be easier – simply take two random, unrelated search terms from the world of internet pornography and stick them together, and you’ve got yourself a “gothic geisha women” costume, or the nothing if not original “zombie plumber female” look.

3. Take a well-known figure and put them in a boob tube

4. Costumes that feature the word “schoolgirl”

Just no. Ditto the words “student”, “head girl”, “baby” or “girl scout”. All of them available from an online store near you, and all of them wrong in too many ways to count.

This is your annual Prince Harry-sponsored reminder that Nazi costumes are never a good idea. One Kentucky family missed the memo on this again this year, dressing in a father-and-son Adolf Hitler and SS officer combination for a party. When neighbours objected, they explained to protestors that it was okay, because they are “history buffs”. Nope, still not okay. Not even a bit.

6. Costumes that appropriate someone else’s culture

Wearing a Halloween costume which reduces another entire cultures, history and heritage to a short skirt and a corset is regarded as a bit rude, frankly. So go ahead, knock yourself out. If you’re truly desperate to be a sexy pizza slice, resplendent in three and a half inches of polyester, then don’t let us hold you back. Just don’t stand near any naked flames. And maybe think about wearing a cardy. It’s freezing out there.