Searching for wonderland in wilds of west Cork

While New Yorker Alice Carey bought a ‘ruin’ in Cork on ‘a whim’, many things lay beneath the decision 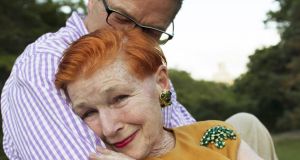 Alice Carey and her husband Geoffrey Knox: ‘We don’t have a lot of money but we’ve a lot of nerve’

It was 1995 when New York-born writer Alice Carey and her husband Geoffrey decided to take their small bit of inheritance and buy an old “ruin” in west Cork, a venture she describes in her forthcoming memoir as a “flight of fancy . . . to fulfil a middle-age dream”.

Their timing couldn’t have been better. Pre-euro Ireland was a different country where £35,000 bought four acres with a big, dilapidated Georgian house and stables in the townland of Dromataniheen.

As we speak, Carey is in New York for the launch of Advanced Style: Volume 2, a fashion book celebrating the style of older women, in which she features. She is something of a fashion icon in Greenwich Village, with her colourful, androgynous style and flame-red Tilda Swinton-esque hair.

She travels frequently between New York and Ireland. “It’s finally coming into a New York spring,” she says, but she checks the Irish weather every day.

“When Geoffrey and I bought this house, it was on a whim,” she says. The couple had seen an ad in the New York Times for a property on the Sheep’s Head Peninsula. “We’ve always had some project to work on, we’re very project-oriented.”

When they came to Ireland to view it, they weren’t ready for what they saw. “It’s bleak out there. We went out and looked at this house and thought, ‘Oh Jesus, no way, no way’.” Unsure if it was faded grandeur or dereliction, Carey describes nights sleeping on a mattress on the floor and waking up in the morning covered in silt, wondering if they had made a huge mistake.

There is, however, a bigger story behind Alice’s “whim”. “You know we had a beautiful little house on Fire Island and Aids happened. We were both in theatre and we literally . . . lost everybody, it’s very hard 20 years onward for people to fathom that. We love giving dinner parties. I used to joke in and around the Aids thing that my A list went to my B list went to my C list. And at that point, there was no point.”

Devastated by loss, the couple sat down and made a list of places they wanted to live. “We don’t have children and we just have each other. And we don’t have a lot of money but we’ve a lot of nerve,” she says.

As the only child of Irish immigrants from Killarney, Carey’s desire to reconnect with her Irish roots and perhaps her beloved mother is evident in her memoir, but this is something that she disavows now in conversation. It was not that straightforward, she says.

“I think it’s because it’s a memoir and you have to please a certain amount of people who want to get me on a simple level,” she says with surprising honesty. “I’m not simple. It’s a period home . . . There’s nothing modern. My mother, who I always think is the star of the book . . . she did eschew Ireland at some point, but I don’t know a thing about my mother. This is what is heart-breaking. Especially to only children and only children who have lost their mothers at an early age.”

Carey is certain, however, that in heading off to New York, her parents were “escaping what they considered old Ireland”.

Carey’s mother is indeed the enigmatic star of the book. A woman who set sail with expectations of a good life and her own home, she found herself living in a small cold-water flat, working as a maid and living under the tyranny of a hard-drinking husband who was quick-tempered and violent. She was fearful, Carey says, of “rising above her station”.

Luckily for Carey, her mother began working as a maid for Jean Dalrymple, a legendary Broadway producer, and Carey would go along as a little girl to help her.

“My wonderful husband Geoffrey said, ‘And they never gave you anything, and you were emptying all those ashtrays!’ As far as I was concerned I was helping my mother. I didn’t expect to get a damn thing but the reality is I got a hell of a lot . . . self-confidence, style, knowledge of theatre . . . ”

Scattered throughout the memoir are turns of phrase like “whore’s baths” and “pot to piss in” that could only come from the mouth of an Irish mammy, and Carey often wonders how her mother would feel about her big Irish adventure.

“Honest to God, I don’t even know would she be happy I was doing this. Because she wanted style and grandeur. I have it. But not back in west Cork in this old bag of a house . . . ”

Perhaps now though, with the renovations finished and Jeremy Irons living up the road? Her “big house” is a “very pretty house and it is painted orange because of Jeremy’s castle, we got the same. It’s the colour of my hair.”

Carey recalls an old woman from the local village calling in on the house to measure their progress. “She’d say, ‘Sure you’ve no one to please but yourselves’. And she was right.”

She wrote the memoir for the same reason that she renovated the house: legacy. She recalls that time in her life when she was losing so many friends to Aids. “I’d be at guys’ bedsides and there was nobody there but me . . . once we decided to leave Fire Island, I think a major personality change happened with me . . . I began to grow impatient with people who do nothing. I looked at some of the poor guys that I sat with and I realised these are nice guys, but they never felt that their lives meant anything.”

She also says she never wanted children. “I’ve no regrets but I do know without having the grandchild . . . people think that’s how they’re going to live on. I don’t believe that that’s the case. So when I want to live on, I want to live through words. I’m surrounded by books in the two countries and I love the power of a book. And I want to see this book in a used bookshop in Ireland where someone can pick it up for a euro. So that’s kind of what prompted us to buy and do the house: its legacy. And to write the memoir, it is all I have.”

Carey believes, in her way, her mother “brainwashed me not to have children. My mother used this great phrase, clearly she didn’t want me to marry, ‘I’d rather be an old man’s dolly than a young man’s slave’.”

Carey was also haunted by her father’s “terrible temper.” She talks about a time in her own life when she worried about her own temper. “I realised that I naturally didn’t want children probably from coming from being an only child and being beaten but I also was afraid that I’d hit the kid, because that is what I was used to.”

She describes the reaction of her new Irish neighbours to the absence of children in the Carey household. “You could see it really confused the old ladies of the village and at some point Geoffrey said, ‘I think you’ve really got to tell them. We don’t have children, we chose not to.’ One lady, I’ll never forget it, and this is a really smart lady, I like her, she said, ‘I’m so relieved you told me, because I thought you’d had cancer or I thought you might have been barren’.” She laughs at the recollection.

It hasn’t always been easy to find acceptance in her new life in Ireland. “You are aware that you’re looked at funny,” she says. Coming to Ireland to stay means that a lot of the famed warm Irish welcome dissipates with time. When she hears New Yorkers say, “The Irish are so charming, they’d bend over backwards to help”, she thinks, “It’s very easy to be charming to someone who really aren’t your neighbours and they don’t understand you as a neighbour’.”

No one really expected them to stick it out. “Everybody knew this old house, everyone knew who owned it before us, I think when we rolled in and bought it and introduced ourselves to everybody and then of course they saw work they thought, ‘They’re going to do it up, sell it, make a bundle and leave’. And we had no intention of doing that. As far as we were concerned this is where we were going to live for a while, come hell or high water we were going to make it livable, we were going to make it beautiful and we did. But once we were there one year, two years, they realised we were not going and at that point a lot of the charm stopped.”

She would do it all again though. “We took a chance at doing something and succeeded. We made it beautiful. We have carved out a life. We have friends. We have made the most out of the circumstances without bitterness.”

And despite her earlier resistance to the idea, she says: “I wanted to bring my mother back to Ireland. I wanted her life to have some significance. That it hasn’t melted away with the ages.”

From Manhattan to West Cork: Alice’s Adventures in Ireland by Alice Carey is out on April 25th, priced €14.99