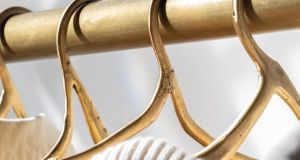 You probably don’t think much about everyday items like clothes hangers, yet Roland Mouret (referred to in this week’s fashion feature) calls them fashion’s dirty secrets.

“They are the plastic straws of the industry… and end up in landfill, it’s a disaster,” the designer told the Financial Times. He has come up with a sustainable solution to offset the damage done by some 100 billion hangers used for transporting clothes from China and India annually.

His eco hangers made in partnership with the Dutch company Arch & Hook from recycled plastic collected from the seas in China are now used in his own stores. Visit archandhook.com.

In the meantime, Omar Arbel, a multi-disciplinary designer, is making brass hangers from 3D scanners of everyday hanger shape using the distorted digital representations to create a mould out of sand into which the molten brass is then poured. A set of four costs €90 (Christmas present for somebody?) from oaoworks.com

“When I first moved back home to Dublin from New York and opened my store, my parents gifted me a tiny diamond star and moon pendant which I wore when I had my children – it links all the memories in all my pictures when I look back,” so says Louise Stokes whose latest collection of fine jewellery focuses on moons, sunbursts and lightning bolt pendants, styles that can be added to an earring or necklace to create similar memories.

This piece, for instance, a gold moon necklace (€348) is from the collection which also includes earrings, charms and signet rings. Visit loulerie.com

There are only two more days to catch the Knitting & Stitching Show at the RDS – today and tomorrow, November 9th and 10th. Organised from the UK which boasts 7.5 million knitters, the event is now in its 26th year running with last year’s show at the RDS attracting more than 12,000 over the course of the weekend.

This year’s attractions include a dressmaking studio, breakfast classes for learning new skills with tutors and workshops staffed by experts from Ireland and the UK. For knitters, it’s an opportunity to buy specialist craft supplies, fabrics and wool from over 150 exhibitors. Tickets start from €13.50.

Margaret O’Rourke celebrates her tenth year in Dublin’s Powerscourt Centre where her shop MoMuse selling her simple, understated jewellery was named by the New York Times as one of the five best places to shop in Dublin.

She is marking the anniversary with a series of events including a 15 per cent discount in store and online (code MoMuse15) from next Thursday, November 14th to Thursday 21st where customers can purchase from the MoMuse core collection that features stars, moons, circles, bars and squares in 9ct and 14ct gold with semi-precious stones, Swarovski crystal, freshwater and baroque pearls all sourced on her regular travels.

Black diamonds are a MoMuse favourite, the designer’s love of their inky blackness adding a touch of intrigue to even the simplest items. Her stacking rings made to nestle into each other are signature pieces. The shop also stocks jewellery by Merle O’Grady, textiles by Mucros Weavers from O Rourke’s native Killarney as well as cashmere by Eilis Boyle.

Tell Me About It: I hate that my girlfriend is friends with her ex-lovers