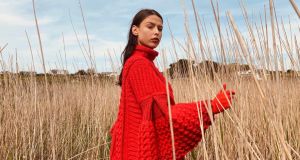 One of the stars of the forthcoming Create in Brown Thomas, now in its ninth year, is the Galway designer Colin Burke, winner of Student Designer of the Year in 2016 at the Irish Fashion Innovation Awards and a year later voted a designer to watch by Brown Thomas.

His collection of ornate, hand-knitted and hand-crocheted, richly patterned sweaters each taking about 40-50 hours to make, display a masterful control of the craft with their dense, textured surfaces, many with stitches he has created himself.

It comes as a surprise to discover that he took up the bioran cniotala (knitting needles) when he first started college only six years ago. “I had always painted and wanted to do fine arts, but I just fell in love with fashion,” he says with one of his characteristic beaming grins.

The oversize Merino wool sweaters that revisit Aran motifs come in bold colours – red, yellow, navy, black and camel – and are particularly notable for their elaborately worked caped sleeves described by Sinéad Burke as “trumpets” when she sported a bright red one to the Áras for her appointment as a member of the Council of State.

It’s not the first of his outfits that has been worn proudly to the Áras. A bold, floor-length quilted canary yellow silk coat from his graduation collection – quite a showpiece and the colour a reference to his grandmother’s daffodils – was snapped up by a stylish Dubliner who wore it there for a special event. For his Create collection, yellow features again, in a special hand-spun yarn from mountain fleece made by Stwist Wool in Tipperary, notable for its subtle variations of tone and shade which he bought in O’Maille’s shop in Galway, a city landmark.

His grandmother, Maureen Burke, who loved the colour yellow, has been a huge inspiration to him and, he claims, educated his eye. Old photos of her in the 1960s prompted ideas for his work.

“She was a fashion buyer for Anthony Ryan in Galway and her mother was an Aran knitter who would have knitted for my dad and uncles. My granny would never leave the house without a blazer and a brooch and I remember her yellow suit which she wore with a yellow crystal brooch. I was very close to her and took videos of her and recorded our conversations before she died.

“When she saw my interest in fashion, she would take me around the boutiques in Galway and always commented on what I was wearing. She also taught me good manners,” he adds. His mother Áine, a personal shopper in Brown Thomas, also fostered his fashion interest and he, in turn, spent a period working in the Galway store.

“You learn so much from customers and everyone is interested in Irish designers and where the clothes are from, particularly visiting Americans. I now want to push the knit as far as I can and reinvent the Aran sweater incorporating hand crochet and, being a home bird, I want to keep going in Ireland.

“From working on the shop floor in Brown Thomas, I am now presenting a collection there and that feels great. It’s a great platform for young designers.”

His pieces here are modelled by Sadhbh Kelly Grealy in Spiddal, Co Galway.

Create opens on Tuesday, July 2nd and runs for six weeks. This year, its biggest yet, it showcases 30 designers across ready to wear, jewellery, accessories, millinery and homewares.

Are your kids are picky eaters? Try this soup loaded with nutrients