Stylefile: Blame Stella McCartney for the popularity of pineapple prints 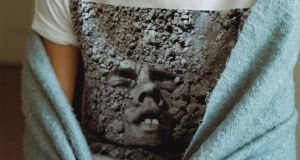 Limited edition T-shirt with image by David Wojnarowitcz is €79 from loewe.com

This T-shirt featuring the work of the American artist, writer, filmmaker and activist David Wojnarowitcz (1954-1992) is one of four that have been released in a limited edition by Loewe under the direction of London-based Irish designer J W Anderson. Wojnarowitcz settled in Manhattan in 1978 and his works are drawn from his personal history as a gay man.

After being diagnosed with Aids, his art became more political and still remains controversial. Anderson conceived the project to foster awareness of Wojnarowitcz, selecting four works made by the artist between 1982 and 1990 on high-grade cotton crew-necked T-shirts. All proceeds of sales will be donated to the Visual Aids Foundation founded in 1988 to preserve and promote the work of HIV-positive artists.

The T-shirts are produced in a limited run of 400 and are available from loewe.com, Dover Street Market (London and Tokyo), and at Printed Matter and the PPOW Gallery in New York for €79 ($99). The T-shirts coincide with an exhibition of works by Wojnarowitcz at the brand’s Gran Via store in Madrid for the month of August.

Blame Stella McCartney for the continuing appetite for pineapple prints, a juicy trend that shows no sign of drying up in fashion. When at the age of 25 and a young designer at Chloe in 2001, she sent out a pineapple print T-shirt and Yves St Laurent also put pineapple prints on the catwalk that year, and the tropical fruit suddenly became the print of the season.

Now, 17 years later, Bonprix in the UK has a trio of pineapple print summer items – a tunic, trousers and a straw bag all with varying graphic images of the fruit. Strangely enough, the prices for these items cited in sterling on its website, bonprix.co.uk, are the same in euro, so the trousers and tunics are both €24.99 and the straw tote €22.99.