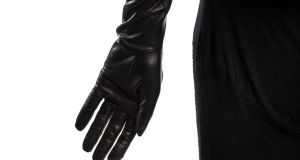 A pair of long black gloves by Irish glove queen Paula Rowan made their first stage appearance in the acclaimed Gate Theatre production of Hamlet, in which Academy Award Nominee Ruth Negga made her “mesmerising” US debut. Called Monserrat, the gloves are worn by Fiona Bell who plays Gertrude, to reflect her status as queen and a dark one at that.

According to Rowan, the gloves are historically accurate as well as elegant and dramatic. A history graduate, she has researched the development and symbolism of gloves. “I think of hands and arms in a way that most people don’t,” she says.

Current fans of her gloves include Negga, Sandy Powell, Madonna, Naomi Campbell, Debbie Harry, Helen Mirren and Kendall Jenner. The gloves are made by hand in a small family-run factory in Naples, and the lambskin Monserrat gloves 16” in length are €850.
paularowan.com

Dubliner Claire Delap, who is currently based in Paris after time in London and New York, has been a documentary and casting producer for 10 years, resulting she says in “obscenely frequent red eyes and a life on the road”.

Every check out meant packing up another hotel room/makeshift production office, and she developed a love/hate relationship with the ziplock bag. That was when the idea for Take Monday, her travel case brand, was born. A play on the ziplock bag but made using biodegradable TPU (thermoplastic polyurethane) and coloured canvas, the bags are designed in Paris and made in Italy, vegan friendly, extremely lightweight and washable.

One called the Moreton (around €48) has become a favourite for those needing something simple to stash moleskins, lip gloss, a phone charger and iPad. takemonday.com

One of the least known Dublin city centre shops selling both fashion and furniture is French Connection in the Powerscourt Centre.

Its latest collection features not only summery organic cotton dresses in tangerine gingham and others in floaty floral prints, but also leather backed wooden armchairs, side tables and rugs made in India, as well as tweed sofas and throws. Still privately owned by Stephen Marks (a sale to Sports Direct fell through in January), the 47-year-old fashion chain has been trading in Dublin for more than a decade with concessions in Arnotts and two stores in Cork, though the Powerscourt boutique is the only one with furniture.

This yellow jacket (€200) and trousers (€115) are modelled here by Amira Himbur and photographed by Alan Betson.