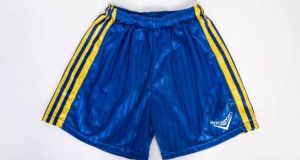 They might have been the fashion item of the summer but Connell’s GAA shorts from Normal People couldn’t compete with the attraction of sports gear worn by Ireland rugby players at a charity auction.

The shorts – popularised when worn by actor, Paul Mescal, in the hit TV screen adaptation of Sally Rooney’s best-selling novel – attracted a winning bid of €850 in an auction to raise funds for the Jack & Jill Children’s Foundation.

However, the GAA shorts, which were signed by Mescal, did not match the €1,650 raised by a rugby shirt and boots worn by Ireland scrumhalf Conor Murray at the Rugby World Cup last year.

However, the most valuable item was Shane Lowry’s souvenir flag from the 18th hole at Royal Portrush after his win in the Open Championship last year which secured a top bid of €2,200.

A cap and gloves signed by the Offaly golfer also raised a further €1,000.

The Jack & Jill Children’s Foundation, which provides nursing home care services for seriously ill children, said its online Auction Thrill for Jack & Jill which closed on Friday evening after a week of bidding had raised a total of €24,389.

The charity’s chief executive, Carmel Doyle, said it was overwhelmed by the generosity of people who had donated items, many of which were of sentimental value, for the auction as well as the generosity of the public in bidding for lots.

A total of 45 items were donated to the charity including the script for the first episode of Normal People which was signed by Mescal, his co-star, Daisy Edgar-Jones and director, Lenny Abrahamson, which went for €650.

Other items included a double magnum of a Grand Cru Class champagne signed by U2 singer Bono.

Ms Doyle said every €16 donated to the Jack & Jill Foundation is used to fund one hour of home nursing care for seriously ill children.

The charity is involved in providing care to 362 sick children under five years of age.

Ms Doyle said the cash boost from the auction could not have come at a better time as the Jack & Jill Children’s Foundation, like many other charities, had struggled with fundraising as a result of the Covid-19 pandemic.

The charity said the restrictions had forced it to cancel its annual golf classic which was scheduled to take place next Friday.

“Covid may have flattened our fundraising calendar but not our vital service which continued right throughout the pandemic with over 60 per cent of our families still in receipt of in-home nursing care,” Ms Doyle said.

She said the remaining families were supported by phone and safe distance house calls from specialist nurses.