Paul Galvin for Dunnes Stores: the Raglan collection is stylish and affordable 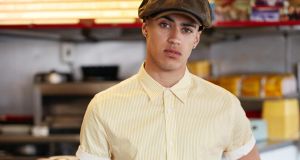 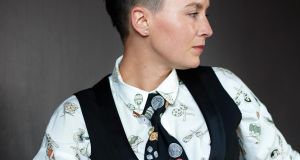 Ieva Sungailaite of Bebrave wearing one of her ties made from upcycled vintage ties.

Banjo print shirts, striped tees, skinny jeans and yellow pinstripes are all part of Paul Galvin’s new Raglan collection for Dunnes Stores with affordable prices starting from €15 for a tee up to €130 for a black leather bomber with the optional accessory being a waxed baker boy hat for €35. The yellow pinstriped shirts can freshen up any outfit and look great here on model Sean Ryan from NotAnother Agency as do the sleek granddad Oxford shirts (€40) in a shoot take in the Chapelizod Industrial Estate by Perry Ogden

Putting unconventional ties for women – and men – back into fashion is Ieva Sungailaite, a Lithuanian textile designer based in Dublin whose short stubby ties, bowties, Ascot ties, pocket squares, tie bracelets and cross ties all made from recycled vintage ties decorated with vintage buttons, brooches and hand rolled flowers have proved a hit with both sexes.

They have been worn by one of the most stylish men in the world Salomon Thiombiano (#ducdubois) and have appeared in French Vogue a couple of times. A textile graduate of NCAD and committed to sustainability, Sungailaite initially made ties as gifts for friends before setting up her small business, Bebrave, two years ago.

Since then, working with her grandmother Irma and other family members, she is exporting her handmade upcycled ties all over the world from Canada to Japan, as well as selling them in street markets and vintage fairs in France every month. In Dublin Bebrave ties can be found in the Rediscovery Centre in Ballymun. Visit her online store https://bebravetextiles.com

Coronavirus: What day of the week is it again?
Real news has value SUBSCRIBE