Celebrities did their annual fashion show for snappers on the red carpet at the Academy Awards yesterday. 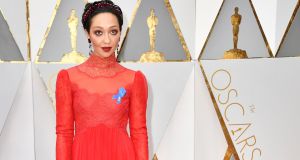 Well, there you have it: the pinnacle of countless throwback red-carpet round-ups and weeks of who-will-wear-what designer speculation. It seems these days, at the Oscars, a question just an important as who will win what, is who will wear what and by whom.

For some viewers, the red carpet rivals the best picture announcement for the biggest part of the Oscars night – although the Moonlight/La La Land upset may make this year an exception.

The great and good of Tinseltown didn’t disappoint, stepping out at the 89th Academy Awards in fresh-off-the-runway gowns and suits for the occasion. Before the show had begun, the nominees’ fashion choices were trending on Twitter.

The red carpet is the alternative stage for stars to communicate – not only their desire to be taken seriously in the fashion stakes, but also their political beliefs.

In the past few weeks, Hollywood has been using its standing to communicate on major current-affairs issues, Meryl Streep delivering a major Golden Globes speech and Natalie Portman taking to the podium at the Women’s March against President Trump in Los Angeles.

While designers at fashion month also got political this week with slogan T-shirts, the Academy Awards attendees used style and tone to radiate their beliefs.

Leading the political sartorial showing was Ruth Negga, flowing down the red carpet in a custom made crimson red Valentino gown topped off with a blue ribbon to show her support for the American Civil Liberties Union. Other attendees choosing to wear the ribbon included Casey Affleck and Karlie Kloss.

Historically, the Academy Awards aren’t an arena for pushing fashion boundaries; fashion with a capital F has been missing for some time. Instead, Oscars night is mainly an occasion for elegance over experimentation. 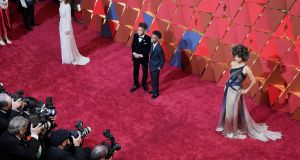 See the best of the red carpet fashion

This was a no-risk red carpet, as stars chose from a sombre palette, and neutrals and metallics came to the fore.

But it was no sartorial flop either. Those looking for high-octane glamour were treated to Hidden Figures actress Taraji P.Henson in a thigh-high slit navy velvet Alberta Ferretti gown – in her now-signature monochrome colour scheme.

Janelle Monae quite literally took over the red carpet in an enormous Elie Saab couture gown.

Opting for a more sober style in classic black, Kirsten Dunst won the red carpet with her pocketed asymmetrical Dior gown, while Alicia Vikander, Salma Hayek and Brie Larson all chose the dark shade too.

There were stand-out styles when it came to menswear too, with Ryan Gosling topping off his Gucci tux with a frilled dress shirt, and Marhershala Ali going tone on tone with a black tux and matching shirt.

Breaking it up with a pop of white, Dev Patel continued his relationship with Burberry, wearing a crisp white tux jacket, while navy was the order of the night for many – with Riz Ahmed, Dwayne Johnson and Matt Damon all choosing the shade.

A march of metallics shone on the red carpet with up-and-coming actress Sofia Boutella shimmering in Chanel Couture, Dakota Johnson in a golden satin Gucci gown, Jessica Biel in KaufmanFranco, Charlize Theron in Dior and Emma Stone stealing the show in Givenchy.

Amping up the beauty stakes, nominees such as Ruth Negga and Janelle Monae opted to decorate their locks with jewelled hairbands.

Petal designs certainly have their moment in fashion but not always on the red carpet. This year the Oscars changed that with flower power introduced onto gowns in modern patterns, and pretty iterations – from Haliee Steinfeld’s Ralph and Russo’s couture gown to Scarlett Johansson’s pink petal dress.

Even though it’s one of Hollywood’s fanciest nights out replete with full length gowns, there were plenty of dare-to-bare ankle length too, including Louise Roe, Kirsten Dunst and Felicity Jones.

This was a contender for top trend of the night. Stars in pale-hued beaded dresses included Olivia Culpo in beaded Marchesa, and Isabelle Huppert and Nicole Kidman in Armani Prive.