Saoirse Ronan was among those to shine as vibrant colours dominated the Oscars red carpet. Video: Reuters 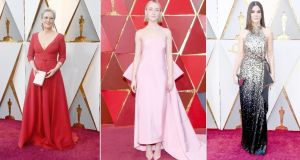 The final and most significant red carpet of the awards season finally arrived on Sunday night with the 90th Academy Awards, and it was a riot of colour and sequins.

The carefully scrutinised red carpet at the Hollywood Dolby Theatre was a denouement of countless other awards ceremonies and weeks of who-will-wear-what speculation. It was watched by several hundred million people and attracted a starry guest list.

It has been a poignant year for red carpet statements - an all-black dress code dominated the Golden Globes and BAFTAS, while white roses at the Grammys and the BRIT awards echoed the #MeToo sentiments. At the end of an awards season memorable for its strength, solidity and power, there was a substantial attempt to keep the Oscars on the sunnier side.

The Academy issued a statement saying they wanted to keep the focus “on films, not the cultural moment around them.”

“It’s really important that you know that Time’s Up movement is not about the red carpet. It was launched on the red carpet, but was never intended to live there,” Rhimes said.

Although the monochrome dress-code was abandoned, the conversation still continued and the red carpet attendees still registered the current movement.  Stars were well aware of how to use their various platforms to draw attention to the causes they believed in, walking the red carpet in the newest creations, best-tailored tuxedos while signifying their commitment to #Metoo with Time’s up pins elegantly included on the gowns of Jane Fonda and Elisabeth Moss. 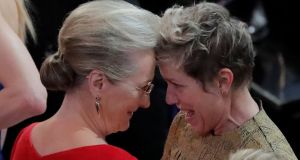 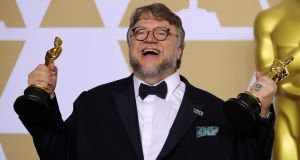 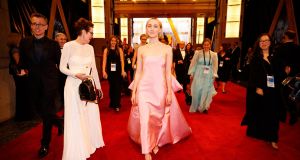 Choosing a more creative way to show support in their style choices - instead of a parade of couture gowns in sobering shades - many of the stars chose rainbow hues. Early to the red carpet was I, Tonya actress Allison Janney, setting the precedent for her peers by choosing a vibrant rouge Reem Acra dress with plunging décolletage and cape sleeves.

Abiding her love affair with colour, Viola Davis picked a hot pink shade gown with a matching clutch. Tasting the rainbow in vibrant blue was Jennifer Garner and Nicole Kidman in striking cobalt with oversized bow detail pared with a contrasted red lip.

The red carpet wasn’t all a dramatic and statement-making affair, offering a more subdued take on glamour with white and nude tones at the fore. A Hollywood star can be made, remade or broken on the strength of their sartorial standing on the red carpet, therefore the style stakes are high, and fashion risks are far and few between. At the Oscars you behave, sartorially speaking too.

Celebrities usually approach the red carpet with a fashion bashfulness as high-profile future roles and lucrative fashion or beauty campaigns are on the line.

Scooping the sartorial award but still keeping it neutral was Saoirse Ronan in a strapless custom Calvin Klein in a powdery shade of pink complete with an oversized bow, that was perfectly pared with a sleek and modern bob and minimalist make-up bringing a newfound, understated ease to the Oscars.

Leaving their experimentation for another day, super-safe, tick-the-Oscar box gowns were prominent, including Allison Williams in a nude bejewelled Armani Prive gown which was something of a departure for the actress’s typical streamlined ensembles.

Underlining the importance of style with timeless appeal were Laura Dern, Mary J Blige and Jane Fonda in classic white - but far from connotations of a wedding-day hue the stars put a more modern spin on it with sleek silhouettes and unexpected details.

Margot Robbie has dominated every red carpet this season - and last night was no exception, debuting her new role as Chanel ambassador in a white custom gown by the French house.

It wouldn’t be the Oscars without a heavy dose of sequins, and bringing the bling was Sandra Bullock in Louis Vuitton, Gal Gadot in beaded fringe Givenchy, continuing her winning style streak, Lupita Nyong’o was resplendent in a liquid gold one-shoulder gown and knowing the value of a simple metallic dress was Jennifer Lawrence. Remaining unwaveringly loyal to Gucci was Salma Hayek in a pink sequin tiered gown.

But it wasn’t all fresh-off-the-runway couture gowns, proving timeless fashion never goes out of style, West Side Story Oscar winner Rita Morenro wore the same gown she first wore to the Oscars to accept her award in 1962.

Refreshingly, this Oscars season saw a number of over-40’s actresses in the spotlight, from Mary J Blige, Viola Davis, Lady Bird’s Laurie Metcalfe, I,Tonya’s Allison Janney, The Post’s Meryl Streep, and Helen Mirren all emerging as a red carpet force to be reckon with in a largely ignored and untapped market by designers.

Coronavirus: Where should you sit on a plane to avoid infection?
4