One of the largest diamonds ever discovered is found in Lesotho 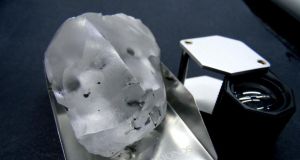 A photo from Gem Diamonds of a 910-carat diamond discovered at the Letseng mine in Lesotho. Photograph: Gem Diamonds via The New York Times

High in the mountains of a small southern African kingdom, miners have unearthed one of the largest diamonds ever found, a glittering giant weighing 910 carats, or 6.4 ounces, and probably worth tens of millions of dollars. The stone, found in the Letseng mine in Lesotho, is the fifth-largest gem-quality diamond ever found, and the largest in Lesotho’s history. It weighs more than a regulation baseball (about 5 ounces), and more than half as much as the average male human heart (about 10 ounces).

Gem Diamonds, the London-based company that owns a majority stake in the mine and which announced the find on Monday, described the diamond as being of extremely high quality.

It said the stone is a D colour, Type IIa diamond, meaning it is colourless and very radiant, without any yellow tint or impurities like nitrogen that absorb light and decrease luster. Gem Diamond’s stock jumped sharply on news of the discovery.

How much the rough stone will fetch at auction remains to be seen, and it will depend in part on any imperfections that limit the size of the cut and polished stones it can be fashioned into. The previous largest find in Lesotho, the 603-carat Lesotho Promise diamond, sold for $12.4 million (about €10 million) in 2006, and diamond prices have increased significantly since then.

Stones of that size can make some of the world’s most extravagant finished jewels seem like mere baubles. Elizabeth Taylor’s famous collection of hefty jewels included a 33-carat diamond ring that sold at auction for $8.8 million in 2011, and a 69-carat diamond, both bought for her by Richard Burton in the late 1960s.

The largest gem-quality diamond ever discovered, the Cullinan Diamond, weighed more than 3,100 carats, nearly three times as much as the next biggest. Several of the world’s largest finished diamonds were cut from it and incorporated into Britain’s Crown Jewels.

The Letseng mine, at an elevation of almost 10,000ft, is known for producing very large, high-quality diamonds. The government of Lesotho, a constitutional monarchy surrounded by South Africa, owns a minority stake in the mine.

Diamonds and garments make up almost the entire export economy of Lesotho, a country with high rates of poverty and HIV infection. It ranks 160th out of 188 countries on the UN Human Development Index. – New York Times