Once upon a time I went to a Celtic Tiger party. (It's a horror story) 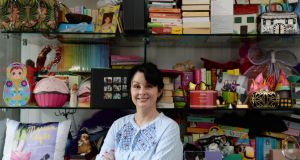 Once upon a time, I was at a party (this is a horror story) and I was wearing very high, very expensive shoes (this was a party during the Celtic Tiger, double horror). The bones of my feet were in such pain that eventually I removed the cruel shoes and promptly became six inches shorter, so that the people I’d been talking to were looking around in confusion, asking, “Where’d she go? She was here a minute ago.”

“Down here!” I called. “You know this reminds me of The Little Mermaid and the sacrifices women make to – wait where are you going?” Because, like I said, it was the Celtic Tiger and people scorned any talk of feminism because they were busy doing boasting about their three investment properties in Bulgaria.

Times are different now, though, and one of our finest feminists Louise O’Neill is working on a retelling of The Little Mermaid and recently several people on social media admitted that this winter they’re having to choose between “eating or heating” (Yep, that’s our world, folks, where “welfare cheats cheat us all” but billionaire tax-evaders are just being “smart”.)

Which brings me, rather clumsily, to my latest Sudden Wild Enthusiasm – a mermaid blanket! For watching telly! A mermaid blanket operates like a zipless sleeping bag, but unlike a sleeping bag, it’s beautiful. It’s got scales, a flipper bit at the bottom and it comes in a thousand gorgeous colours. (Available on Etsy and Amazon. )

While you’re wrapped in it, you get to pretend to be a mermaid! You can comb your hair if it enhances the fantasy. And – double bonus points – it’ll help with the heating bills!

Before you lose the head, I’m attempting satire here. Four years ago, in the UK, David Cameron told people who couldn’t afford their heating, to wear more clothes. It wouldn’t surprise me if our lot issued similiar advice so I’m making a tiny little protest, while also being genuinely wildly enthusiastic about my beautiful mermaid blanket.