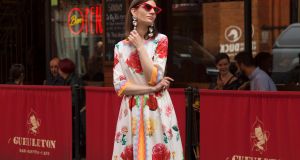 Ruth Ní Loinsigh founder of Om Diva, one of Dublin’s most loved independent boutiques, says she was always a diva.

As a UCD graduate in German and Italian she spent six years travelling around Asia after college “and even though I was a hippy, I always had a dress which had been tailored in India from saris and other great clothes while all other backpackers simply wore T-shirts and shorts. People always wanted to buy my dresses,” she recalls. As for the “Om”, she explains that it is an old Sanskrit symbol bound up linguistically with the other languages she studied at university.

Today, she is best known for bringing vibrant colour and exuberance into Drury Street with her boutique which not only combines the zany clothes and accessories she sources from her contacts in Asia and India, but also the work of talented young Irish designers along with vintage finds.

Her enthusiasm for what she does is infectious and her experience in making and selling from her bohemian days as a street trader around Europe and on beaches in Greece has never waned. When she returned to Ireland in 1998 she started a market stall in the Blackrock Market and another in Mother Redcaps selling her finds from India, moving to a stall in the Sth Great George’s Street Arcade a year later which she successfully ran for five years with regular buying trips to India.

In 2005 she opened Om Diva with three Irish designers; now she has more than 30 “and it is still growing”, she says.

On Thursday, July 5th she will celebrate the boutique’s 12th birthday with a party and a series of special events.

A guest speaker will be Isabelle Davy from the UK talking about her journey from diva to her role in designer relations at the British Council of Fashion, but a big part of the night will be dedicated to 50 of her designers past and present who include Alison Conneely, Tissue, Umit Kutluk and her very first Irish designer Anya Vasylenko (who now heads up Issey Miyake in New York). Each will create a one-off piece to be sold as a fundraiser for the Dublin Rape Crisis Centre at affordable prices from €50 upwards.

Ní Loinsigh has also collaborated with NCAD jewellery design students to create a Diffusion range titled Design for a Diva with a showcase in September. Later in the year as a return to her roots, she will travel to India to create her first homewares collection.

So here’s wishing Om Diva a happy birthday and many more successful years brightening up Dublin’s fashion scene in its own inimitable exuberant way.

Support bubbles: Everything you need to know
8