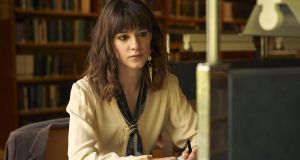 As our contact with the outside world shrinks to the size of a screen, once-private things have been pushed to the fore.

Our bookshelves, formerly unseen by our co-workers, have become pregnant with meaning. Our tired faces, once optimised for the workplace with concealer and a fancy neckline, are beginning to crack after one too many Zoom meetings. For those of us working from home, headshots are the new hemlines.

Then there is our hair: our rubbish, 10-week too-long hair that we can’t really improve without breaking the law – or at least a headband.

In the past few months, the word haircut has seen a formidable 1,379 per cent increase in Google searches compared with 2019. And of those Google searches, “fringe” is the top hit for women. This will come as a surprise to no one. After all, the dos and don’ts of trimming your own “lockdown bangs” have been pored over everywhere, from TikTok to the New Yorker, with the hairstylist Jonathan Van Ness of Queer Eye offering a primer in the latter to New York’s literati on the difference between a point cut and a blunt cut. For those interested, Van Ness, who cut his own bangs last week, offers two good pieces of advice: “Try to not cut it wider than the outside of your brows” and only do it “if it makes you feel more at peace”.

Like so many successful things in 2020, the lockdown fringe began on social media and, also like so many things, was consolidated by the TV adaptation of Normal People. Connell’s silver chain might have spawned its own social media account and be “comparable to what James Dean did for the simple white T-shirt” (according to its costume designer), but so, too, has Marianne’s evolving fringe, which came with its own story arc – choppy when young, flourishing during her sexual prime, and so on – and now its own Instagram account, @Mariannesbangs, with 6,000 followers and counting. Earlier this month, Vanity Fair even published an essay in homage, called Fringe Watch. Sandra Kelly, the show’s hair designer, describes the online reaction to Marianne’s bangs as “Fringemania”.

Still, a sharp, face-framing fringe on Zoom has become yet another impossible beauty standard to add to the list, and one that reflects self-improvement over pandemic restriction. Bella Hadid cut hers in lockdown to match Audrey Hepburn in Roman Holiday with surprising deftness, and Anna Wintour seems to have a live-in hairdresser.

If hair has become a talking point of lockdown – and further proof that personal grooming is key to our welfare regardless of what is happening in the outside world (the re-opening of beauty salons in Italy this month allegedly outranked restaurants and shops in demand) – then DIY fringe cuts are a distillation of this new normal. Lengths vary, but the sentiment remains – a good fringe is proof that the wheels of professionalism are working nicely, even if they are coming off.

“It’s actually more about [change], about wanting to feel normal, or to appear normal to the outside world,” says George Northwood, the fashion media’s go-to hairstylist. “I get that now is a time to experiment, and while I probably wouldn’t suggest cutting your hair – there are things you can do, with scarves and hairbands, which will extend the need – I understand this is about more than just a cut,” he says. “And frankly I’m behind doing whatever you can to stay sane.”.

This wasn’t always the case. In the halcyon days of March, we didn’t know when things would end; a haircut was the last thing on our minds. At least for women. Clipper sales are up over 200 per cent, which suggests that men have been trimming their beards and hair for weeks. But as yet there are no available figures on whether the same is true for hairdressing scissors.

We’re now weeks into lockdown and well past the sweet spot of a recommended trim – “which is absolutely six to eight weeks”, according to Northwood, the man who coined and cultivated The Alexa (Chung) and The Claudia (Winkelman). As for the fringe, “it generally has a four-week shelf life. So if you went into lockdown with one, chances are you will have given yourself one trim already”. Northwood has been guiding clients such as Winkelman into cutting hers at home, using clips, point cutting and texturising scissors, videos of which have been uploaded on to social media. He says most of his work right now is on YouTube.

“Cutting your hair now is mostly born out of necessity, and yes definitely a way to feel like you are in control, that you are not losing yourself,” says Rachael Gibson, a hair historian. To many people, the thought of going to a hair salon represents a return to normality after a long, destabilising period – in lieu of this, cutting our hair is as close as we can get.

Recent history, Gibson says, shows “certainly a correlation” between changes in grooming and crises. During the Great Depression, for example, cosmetic sales initially dipped in the US, though by 1939 they were up 35 per cent. When the British economy waned in 2008 after the financial crisis, nail polish sales went up 65 per cent. And in the early 2000s, Leonard Lauder, chairman of the board of Estée Lauder, coined the term Lipstick Index, which suggested that in leaner times, women turn their buying power towards smaller luxury items such as lipstick to get their fix.

In these screen-focused times, and with mask-wearing soon possibly to be mandatory, could we be on the cusp of a Fringe Index?

There is something subtler at play, too, particularly when you consider the semantics of how politicians dress. Boris Johnson’s unkempt hair might be a bid to identify with the proletariat, but just makes him look even more posh.

The pandemic has plunged us into deep uncertainty. The twist, says Northwood, is that people are also after fringes when salons re-open. “It seems that cutting your hair is one thing, but focusing on the fringe is more like a mood change, something that marks a new beginning.” – Guardian