The major designer debuts, the biggest bash and the questions to ask 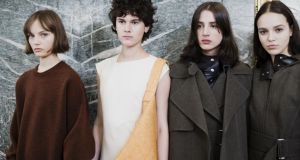 And thus do the New York Fashion Week frolics – or follies, depending on your point of view – begin: in the wake of the US Open, in the shadow of the Emmys and amid the turmoil of American midterm elections in which more women are running for office than ever before. The status quo is shifting, along with the relevant dress codes.

This will be the undercurrent of the season, even in Europe, as Britain hurtles toward Brexit. Designers can’t ignore it (or they ignore it at their peril). What will they give these potential power women to wear? It’s a complicated question. I, for one, am looking forward to the answer.

As for what else to anticipate as the circus makes its way from New York to London, Milan and Paris, read on.

There will be two megadesigner debuts

First up in London will be Riccardo Tisci, one-time Givenchy darling, favourite of Kardashian-Jenners everywhere, who returns to the catwalk with mens- and womenswear after a year and a half away, this time to reimagine Burberry after the departure of Christopher Bailey.

The idea of an Italian at the helm of Britain’s largest luxury brand has already sent acolytes into a tizzy, but an Italian with gothic tendencies? They are quaking in their plaid. Tisci has taken steps to increase his guest Briton cred, announcing a collaboration with Vivienne Westwood; releasing a capsule of “B Classics” he did not design, but curated; working with Peter Saville, Britain’s most venerated graphic designer, on a retro-looking new logo. But the proof will be on the catwalk.

Marco Gobbetti, the Burberry chief executive, has declared plans to take the brand further into luxury territory, and the delivery cycle is shifting from the seasonal model to smaller monthly drops. So for those carried away with excitement at what they see, some of what’s on the runway will be available to buy immediately.

What’s the second one?

The only other show for which breath is so bated – and one with the same amount of money and pressure riding on its success – is Céline, where Hedi Slimane is returning to the fashion fold (and the arms of the luxury giant LVMH) after saying farewell to Saint Laurent in 2016 and taking time to find his bliss as a photographer in Los Angeles.

He gave YSL, owned by Kering, the LVMH rival, a head-to-toe makeover in his three years there. Expectations are that he will do the same with Céline, where he is also introducing menswear. He has already begun, by reinventing – kind of – the logo, reviving a 1960s-era look and dropping the accent over the E.

So far only a single bag has been spotted, on the arm of Lady Gaga, an FoH (friend of Hedi), and it was a structured black leather number with a Mies van der Rohe edge and some discreet gold hardware.

Whether that direction will help women who loved the just-conceptual-enough minimalist aesthetic of the former Céline designer Phoebe Philo overcome their fears that Slimane, with his affinity for strung-out indie musicians, will upend their go-to brand remains to be seen.

Get ready to read the tea leaves of the respective front rows, because who gets what celeb where is going to be telling.

Get ready for a big birthday bash and two smaller ones

Fashion loves an anniversary, especially when it has the word “golden” in front of it. Ralph Lauren (the brand, that is) is turning 50, and sparing no expense to do it. In 2008, Lauren (the person) held a blowout show and black-tie candlelit dinner for 400 in the Conservatory Gardens in Central Park to celebrate his 40th year in business.

This time around he is taking over Bethesda Terrace, also in Central Park, and presumably the stakes have been raised. Expect star-spangled celebrities and classic Ralph-isms on the runway. It’ll be the biggest do of the week.

Victoria Beckham is leaving New York to return to her London home base for her label’s 10th birthday. She has a new chief executive (Paolo Riva, formerly of Diane von Furstenberg) and new backers, so a new phase may be in the works. Also heading back to London from New York: Jenny Packham, a favourite of Kate Middleton’s, for her 30th. It’s unlikely the duchess of Cambridge will be at the show, but given that Queen Elizabeth made a surprise appearance at Richard Quinn last season, you never know.

The return of prodigal sons and daughters

More returns, although not for any specific reasons. After experimenting with time in Paris during the couture, the next-gen trendsetters Proenza Schouler and Rodarte are coming back to New York, much to the relief of those who have foretold a future of designer flight. (Yes, mea culpa.)

Longchamp is also ocean hopping, to the United States, for its first full-fledged runway extravaganza. Her buzziness, Rihanna, is likewise back on the New York schedule, although not with her ready-to-wear line, Fenty x Puma, but with Savage x Fenty, her inclusive lingerie line. Speaking of which, the runways are becoming significantly more diverse, both in terms of race and size. With luck it will continue.

And more and more labels are combining mens- and womenswear, which makes sense, given the weirdly antiquated nature of gender separation as a concept. Joining the ranks this season will be Prabal Gurung, who is introducing menswear at his New York women’s show, and the Row, which will unveil its men’s and women’s looks in a presentation.

Gucci is taking a one-time-only sabbatical from Milan to show in Paris as the last leg of the designer Alessandro Michele’s ode to France, which began with the pre-fall ad campaign and continued through the resort show in Arles. The finale will be held at Le Palace, a theatre that was once the famous nightclub of the late 1970s and early 1980s, which is having something of a fashion moment.

Finally, Bottega Veneta is sitting out this season so that the Daniel Lee, its new designer, can get ready for his bow in February. Ditto Nina Ricci, which just named Rushemy Botter and Lisi Herrebrugh as its new creative team. Soon enough they’ll be the ones to watch.

But we’re getting ahead of ourselves. Lace up your Balenciaga kicks. The marathon begins now. – New York Times