New York fashion week: What to look out for in the days ahead 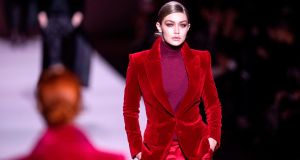 Congratulations! You’re having a Fashion Week. Even if you won’t be attending it.

New York is hosting its fashion week, which brings thousands of people and millions of dollars into the city for a “week” (loosely defined) of mostly private shows for a mostly industry (but increasingly influencer-stocked) audience.

The CFDA does not track visitors, but IMG, which hosts a bit over half of the on-schedule shows and presentations at its official sites, has a guess: It is expecting almost 48,000 visitors at Spring Studios, its primary site, alone.

Even you, then, Mary Q Passer-by, can expect to get jostled by clowder of invited (and occasionally not-invited) guests posing in their best outfits for an appreciative group of street-style photographers.

You, Ms Passer-by, may be grateful, even despite this inconvenience: The two New York Fashion Weeks (the other in September), according to analysis by the New York Economic Development Corporation, account for nearly $900 million in economic impact annually.

So: Ka-ching! Reports of the death of fashion week, a mainstay in front-row complaining, have been, to say the least, premature. That being the case, what should you, discerning consumer and interested observer that you are, look out for? Glad you asked.

In New York, Departures and Returns

The first official day of New York’s women’s shows is Thursday, and haunting the proceedings is a show that isn’t: Calvin Klein, which parted ways with Raf Simons, its chief creative officer, just before Christmas. Its next designer has yet to be announced.

Calvin Klein was one of the tent poles of New York Fashion Week, all the more so because since many of its compatriots have fallen off the schedule or taken to showing elsewhere. (Looking for Tommy Hilfiger? The company will show in Paris this season.)

But New York has always been hospitable to newcomers and rising stars, even if some of them have a habit of leaving home once they hit it big. (Joseph Altuzarra? Gone to Paris. Thom Browne? Him, too. The new star Kerby Jean-Raymond, of Pyer Moss? Taking a season off.)

Back on is Rachel Comey, who showed Wednesday, and Elie Tahari, who will return to the official week to celebrate his 45th anniversary.

And back, too, is Erin Beatty, formerly of Suno, which shuttered in 2016.

After Suno closed, Beatty said she felt depressed and was losing confidence in what she was making and how she was making it. Now, after a couple of years working behind the scenes, she is returning with Rentrayage, a collection of pieces remade from vintage clothes, a stab at sustainable fashion and thinking through the implications of her production in a new way.

Beatty had a KonMari-esque test for the vintage she sourced to use as raw materials. “If I put it on and I loved it, I refused to cut into it,” she said. “It’s pieces that I felt needed to change in order to survive.” Like herself, she admitted. And like New York Fashion Week. “I’m super-excited to be back,” she said. “I want it to survive so badly, to be honest. I want these other designers to come back to New York. I think with everything that’s happening in the country, it’s a really good time for us to be proud of the fact that we’re Americans and we’re thinking about things differently. I want there to be a reawakening of American fashion.”

In London and Milan, A Mix of Men and Women After New York, things pick up in London, where more than 100 catwalk shows, presentations and events are scheduled over six days. Riccardo Tisci, who showed his first collection for Burberry in September, will present his follow-up show. Several young labels that have shown as part of group shows, like Symonds Pearmain, or in presentation format, like the faux-fur label Shrimps, are jumping to full shows. Expect particular excitement around Wales Bonner, which has, since its inception, shown during London’s menswear week. Grace Wales Bonner’s historically inflected collections, with their sumptuous materials and polyglot references, have been eagerly taken up by men and women both, and she won the LVMH Prize for young designers in 2016. Men and women will get increasingly equal airtime at Milan Fashion Week, during six days of shows.

Several of the biggest and most moneyed Italian labels have opted to combine formerly separate men’s and women’s shows, including Gucci, Giorgio Armani, Salvatore Ferragamo, Missoni and Bottega Veneta. That last will come in for especially close scrutiny. Bottega Veneta’s autumn show February 22nd will be the first by Daniel Lee, the house’s new creative director, a young and relatively unknown Briton who came from Celine.

Speaking to Vogue in November about his pre-fall collection, Lee rhapsodised about Italian style and the “done-up elegance” of Italian icons like Gianni and Marella Agnelli. “It’s time for that to come back in fashion,” he said. Safe to expect he will do his part to bring it. In Paris, Stalwarts Reborn The last of the four major fashion weeks is in Paris, a nine-day affair with a stricter admissions policy: There are only (if “only” is the correct term here) 78 shows on the official schedule. Paris is where Chanel trucks in tons of sand to make a beach, or ice to float an iceberg; where Dior books dance troupes; where Givenchy takes over no less august an edifice than the Palais de Justice on the Île de la Cité.

The historic houses tend to rule in Paris, which means change can be slower to arrive there. But several heritage labels and long-standing brands will be under new leadership this season.

Nina Ricci, long associated with Parisian coquetterie, is now in the hands of Rushemy Botter and Lisi Herrebrugh, an international couple with roots in Cura?ao, the Dominican Republic and the Netherlands and a separate menswear collection, Botter. Lanvin, which has cycled through creative directors since the departure of Alber Elbaz in 2015, will now be designed by Bruno Sialelli, who came from Loewe. (Lanvin declined to comment on whether Sialelli’s designs would be on the runway at its February show.) And Lacoste will be, for the first time in its 86-year history, under the direction of a woman, Louise Trotter, most recently at the English brand Joseph.

Even with the dominion of the major players, some newcomers are budding in Paris. Seek, Passer-by, and ye shall find: Why, here’s Rokh by Rok Hwang, a Korean-born, London-educated alumnus of Phoebe Philo’s Celine, who rose onto the radar of many when he was given a special award by the LVMH Prize jury in 2018. “We have been waiting a very long time” to show, Hwang said in an interview from London. He will stage his first runway presentation February 25th, as editors begin arriving in Paris. His collection is already carried at Net-a-Porter, Bergdorf Goodman and Saks, and he acknowledged that showing brings pressures many designers have elected to avoid. “In terms of sustainability and economics, it’s really hard for a younger brand to do a show,” he said. “But I also think it’s kind of the only form. It’s something that’s exciting. I wanted to take the classic form and do our own version.” - NYT