Neck-grabbing, virus-spreading reservoirs of pathogens: Have ties had their day? 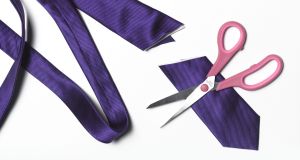 Spare a thought for the humble tie. It hasn’t had the best publicity of late. You might even say it’s struggling for relevance in the age of coronavirus.

For one thing, working from home has rendered it all but obsolete. With many men working from their kitchen tables and opting for more casual work attire, ties have been gathering dust in drawers and wardrobes.

Even those in public-facing jobs have been eschewing the tie. In April a bare-necked Leo Varadkar told reporters that he had managed to “burn the tie” and bemoaned how they “grab your neck”. Last week Fianna Fáil’s negotiating team were photographed strutting down Kildare Street as though they were in Reservoir Dogs – but with not a single tie between them. Then, of course, there was a gloomy-looking Donald Trump disembarking from his helicopter with his tie undone after his poorly attended rally in Oklahoma at the weekend.

I’ll always wear a tie in the Dáil chamber, as it’s the national seat of parliament and deserves that respect. But the tie will usually have been taken off before I get back to my office

As if things couldn’t get worse for the tie, there is now talk that they are potential germ carriers. The Taoiseach called them an “infection control issue”. Back in March the governor of Virginia, Ralph Northam – a doctor as well as a politician – stopped wearing ties altogether, explaining that they can “harbour contagious pathogens”.

Indeed, the British Medical Association advised doctors to stop wearing ties back in 2006, labelling them “a potential reservoir”. In Ireland, the HSE advises staff in clinical and patient settings to avoid neckties as they “can be a source of infection”.

Now certain schools in the UK are advising parents that pupils need not wear blazers and ties any more. That’s because they should be washed every day to help avoid the spread of infection, but that’s too impractical to be feasible.

So is the tie at risk of following the hotel breakfast buffet as a casualty of coronavirus?

Seán Treacy runs Hunter Treacy Tailors, on Dame Court in Dublin. “I think ties, as a necessity, have been dwindling in popularity for some time, as more and more people dress casually in the workplace – and certainly now that the workplace is the kitchen table for most,” he says.

That said, they still enjoy something of a cult following.

“Those who wear ties these days do it mostly because they appreciate the tradition and craftsmanship that go into a tie,” he says. “Similar to a manual or automatic watch. Your phone can tell the time, but people still wear watches because they appreciate and enjoy it. Ties will never disappear, but they certainly aren’t mainstream any more unless you’re a banker, getting married or own a tailors.”

Among the TDs photographed without ties in recent weeks was Marc Ó Cathasaigh of the Green Party. So why did the Waterford TD opt for an open collar during government-formation negotiations?

“I didn’t wear a tie because I hate wearing ties,” he says. “I’ll always wear a tie in the Dáil chamber, as it’s the national seat of parliament and deserves that respect, in my opinion. However, the tie will usually have been taken off before I get back to my office.”

He adds, a touch mournfully, “It’s a grim irony that most of my career choices up to now were influenced by not wanting to wear a suit and tie – and now I find myself in formal clothes most days.”

With the prospect of returning to the office on the horizon, many men might need to wear a tie again in the coming weeks. Seán Treacy has some tips for looking after them with Covid-19 in mind.

“In terms of cleaning your ties, it all depends on what they’re made out of,” he says. “We only sell silk or wool ties, which don’t like hot temperatures, so we’d recommend just handwashing a high-quality tie.

“If you do have to wear ties and want to avoid germs, I’d rotate them regularly; wash them in lukewarm water, then leave them sit up for a while before wearing them again.”

Should we stay or should we go? Readers on holidaying abroad this year