The supermodel on fashion’s racial bias, addiction recovery, and her devotion to face masks 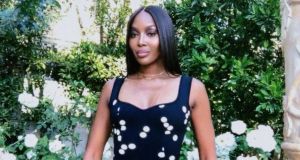 There are so many Naomi Campbells, you never know which you will get. There is goddess Naomi, whose verified superpowers (ask any eyewitness) include an ability to part seas of people and alter the electrical charge in a room. There are cover girl Naomi and campaign Naomi and runway Naomi, whose catwalk strut is unlikely to ever be outclassed. There is vulnerable Naomi, the unexpectedly bashful human who first appeared on the modelling scene at the tender age of 15.

There is activist Naomi, who called Nelson Mandela grandad, and there is party girl Naomi, who wears a string of playboy and oligarch heads strung from her belt. There is golden-hearted Naomi who “would give you the Prada off her back”, as an old friend recently noted. And there is cold-hearted Naomi who, when a close friend needed funds for heroin rehab, turned her back.

“Fighting on arrival, fighting for survival,” the modelling agent Bethann Hardison, Campbell’s lifelong guide and protector, once said of her. And despite struggles with the race-based inequalities too long unchecked in fashion, Campbell has not only remained in the public eye for three decades – light-years in the modelling business – but also has reinvented herself, after a half-century on Earth, as a digital media phenomenon. Her show, Being Naomi, is both vacant and mesmerising, almost Warholian level, and a canny master class for the aspiring brand-building narcissist.

Campbell, who was born in London and recently turned 50, has kept busy during and beyond lockdown at a friend’s house in Los Angeles. She shares her daily workouts with the Ocho System founder Joe Holder on Instagram, attends virtual recovery meetings, has become the first face of the Pat McGrath Labs make-up line, and tapes “No Filter” interviews with old friends and colleagues such as Sharon Stone, Marc Jacobs and Cindy Crawford. Recently she conducted a disarmingly frank beauty tutorial for Vogue’s YouTube channel.

Reached by phone on a Friday evening in early June, Campbell talked about what, in fact, it is like to be Naomi.

“Of course, it is race based,” Campbell said of the bias in fashion that kept the deck stacked against the black creators whom Anna Wintour recently conceded had not been given enough “space” in places such as Vogue. “But I never expected things to come to me easy,” said Campbell, a woman the chiffon warrior, André Leon Talley, once called “a self-made cyclone of energy, style and drama”.

2. She dealt with it in the usual way

“I knew I had to work extra hard, and when I think about it now, I’m grateful to have had a lot of strong women in my family showing me how to stay strong physically and mentally if you want to survive and strive,” Campbell said. “I’ve always been raised, by my mother, my nana, the wonderful strong women in my family, from this strong ancestry to understand that, whatever I was going to do, I had to do it 110 per cent.” Campbell’s heritage is a combination of Afro-Jamaican and Chinese-Jamaican. (Her Chinese-Jamaican grandmother was Pearline Ming.)

3. But don’t call her a survivor

“It’s adaptation,” she said. “Back in the day, I would say: ‘Why am I doing this if I’m not getting treated the same as my counterparts? Why am I not earning the same money?’ Luckily, I had wonderful people like Bethann that I would call, and she would explain to me why it would be beneficial to go forward and do it and we’ll see the results in the long run.”

“If I thought things were unjust, I had to say something,” said Campbell, whose record on the subject is somewhat mixed. True, she was a founder of the Black Girls Coalition, a group organised to address race-based inequities in fashion. It is also true that she once tried to squelch the career of a newcomer named Tyra Banks. “This is to do with me. I am talking about, my career,” she said. “The point is to try to make the best of the situation you’re dealing with. I don’t look at it as surviving. I look at it as life.”

5. She has depended on the kindness of strangers

“I am blessed with the people I’ve had in my life, the influences of their wonderful great minds and spirits and beings,” said a woman whose Rolodex – if people still kept such things – would be the size of a tyre on a 16-wheeler. “I think of Azzedine Alaïa and Nelson Mandela. I got to meet them, live with them, know them, be around them, consider them family. You sometimes don’t realise when people are here that you could never think of the planet without them. Then, when they go, suddenly the panic sets in: What do I do? Who do I run to?”

6. She found spirituality, but only after the drugs

“What I found is that this strength comes,” Campbell said. “All the connections, everything you ever had with them, comes to you in another form. They’re still here and pushing you. When Papa passed away, it was such a shock.” Alaïa, the Tunisian couturier who effectively parented Campbell throughout her career, died in 2017 at 82. “I was really thrown,” she said. “But then this strength came to me from somewhere, I don’t know, I can only say from him. I realised I had to do more, help more, be there more.”

7. She believes in that second A

“I’m very proud of my recovery and proud to be in recovery and would never hide that fact,” said Campbell, whose much publicised anger management issues may have been fuelled in part by chemical dependence. (Alexander McQueen used to joke to friends that they should hide their phones when Campbell came to visit.) “We’re not supposed to promote recovery, but I am not in denial of any of that,” she said. “It has been a great help to me in other areas of my life.”

8. The steps in 12-step programmes are more than metaphor

“I’m the kind of person that needs structure,” said Campbell, who has a notoriously individual relationship to time, and who was, for instance, two hours late for the Zoom photo session for this article; who was once famously fired at first meeting by producer-director Lee Daniels for being three hours late to an audition (an incident that resulted in a screaming match followed by an acting gig and an enduring friendship); and who nevertheless must own a very big alarm clock since she has somehow managed to rise on time to be photographed for the 300 magazine covers that have been graced with her image. “That’s how I function best.”

9. She is a routine queen

“I have a routine I kept during quarantine,” she said. “Get up, pray, shower, work out. In times like this, you need that sense of familiarity and routine to keep your mind and spirit in a safe space.” You also need, to judge by Campbell’s Vogue YouTube tutorial, a foolproof 10-minute method for beating your face with skills so refined that they may give Bianca Del Rio pause.

10. The Federal Aviation Administration should hire her

“I never made that to go viral,” Campbell said of the 2019 video of her flight sanitising ritual, which has more than 2.9 million views on YouTube and which, though it may once have seemed extreme, ought to be required viewing for anyone planning to board a plane again. Campbell began routinely wearing face masks to fly in the early years of the century. “In Japan, I was seeing everyone in these masks, and I thought, ‘This makes sense,’” she said. Some 15 years on, her methodology stops just short of travelling with a decontaminating Aerosolizer (though she has been seen in a hazmat suit). “I thought, ‘I can bring my wipes and wipe it all down, no insult to any airline,’” she said. “It was what I needed to do to make myself feel comfortable.”

11. She understands that wherever you go, there you are

“This virus, the lives it has taken, is devastating, and yet being still, being in one place, can be amazing,” said Campbell, who has logged more planetary orbits than most satellites. “If there is one thing that I’ve learned in this lifetime so far, it is that there’s no getting away from anything. We’ve got to face our fears and go through the emotions.

“Many things in life didn’t work out for me. It’s okay. I tried. It’s a good thing to be able to look at yourself in that mirror, no running or rushing about – just me, myself and I. At the end of the day, you have got to be able to sit with yourself in solitude, or you aren’t alive.” – New York Times

Irish family stuck in Cyprus: ‘We hope our flights home are cancelled’
3

‘I spent lockdown renovating a little piece of heaven’
10