Mind the gap: the death of the cleavage

Vogue UK says the cleavage is out but here’s the thing: fashion is all fun and games until somebody goes under the knife to change their breasts 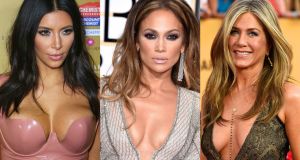 Vogue has proclaimed the death of the cleavage and unleashed a bazooka of double entendres on the world. “Cleavage, it seems, has finally gone bust,” arfed the lady-loving Daily Mail.

According to the latest edition of UK fashion bible Vogue: “The cleavage – those magnificent mounds pushed together to display sexual empowerment, to seduce, to inspire lust or even just to show off – is over, or at least, taking a well-earned break.

“The t*** will not be out for the lads. Or for anyone else, for that matter.”

How many breast jokes does it take to change a lightbulb?

Of course, the media used the death of the cleavage to breathe new life into their old file pictures of, well, the cleavage. (See above)

The Telegraph went for J Lo and Jennifer Aniston breastage, the Independent revealed Michelle Rodriguez and the good old Daily Mail proved seminally that cleavage is over by offering us a semi-naked Kim Kardashian. They did not reveal how Kim had taken news of her cleavage’s demise, though.

The Vogue article was temptingly headed “Desperately Seeking Cleavage” and in a touching nod to female empowerment stated: “Rejecting the stereotypes of gender has been brought sharply into focus, with the days of women as eye-candy, their sexuality positively smouldering rather than subtly played out, officially over.”

It was all looking so good. Jordan, aka Katie Price, had announced her eighth boob job, and media bottom-feeders were pushing sidebar breasts like there was no tomorrow. Things were looking up for our breasts.

Then, biting the hand that fed her, former Wonderbra pneumoid Eva Herzigová wore a pie-crust collared white blouse under a trouser suit for the Vogue centenary party. “Bye bye, Boys”, as the new catchphrase didn’t read.

It was a no-brainer. Zeitgeist guru Beyoncé had worn a high-necked skin-toned latex number to the Met Gala in New York in May. And when Beyoncé speaks, the world listens. The times were a’ changin’.

Anyway, fashion waits for no woman. That is how the circle of merchandising life works. Change is vital if units are going to be shifted. Spice Girl-turned-fashion designer Victoria Beckham knows that only too well.

Beckham embodies the cut and thrust of the physical changes demanded by this new love of the conservatively-chested. Her body bears the marks of changes in breast trends. She went from a 34A at the start of her Spice Girls career to a 34DD back to a slimmer outline now. Bangers on trend – as the Daily Mail might say.

We leave the “official breast”, as Naomi Wolf once dubbed it, behind – again. We are trading the champagne-glassed bosom of Marie Antoinette and the cartoonish wonder-shape of Jessica Rabbit for the more austere, just enough nature of these challenging times.

There is nothing like expressing political turbulence and economic decline through the body of a woman. The female form is there for the taking, after all. It is there for us to write large – or small – the proclivities of our times.

A recent survey by skincare giant Dove found that just 20 per cent of women in Britain are confident about how their bodies look, so your average woman is hardly riding this new trend with glee. Arguably, the fact that “less is now more” in the breast department has nothing to do with most women anyway, for breast size is actually increasing.

In May, the Telegraph reported that soft cups now make up 30 per cent of Net-a-Porter’s bra sales. The most common request among cosmetic surgery patients now is for a mid-C cup rather than a double-D. At the Harper’s Bazaar Women of the Year awards this year, winners Keira Knightley, Felicity Jones, Donatella Versace and Gillian Anderson all opted for high necklines. Cleavage is so last year.

So, a bunch of fashion-peddlers have decided to change it up by championing the more natural breast over a pneumatic cleavage. So what? Women are buying more non-cantilevered, non-underwired bras anyway. Why? Because they are on-trend? No, because they are comfortable. The top 10 best selling bras on Amazon today do not have an underwire in sight.

Fashion is a frippery manufactured to keep bodies looking good and other people’s bank balances looking better. And fashion is all fun and games until somebody loses an eye – or goes under the knife to change their breasts.

Now, the terrible vista is that it won’t just be our bras we will change to suit the physical whims of the times we live in. Like Victoria Beckham, it will be our bodies.