Stars serenaded by Alison Moyet while onlookers gather in the rain 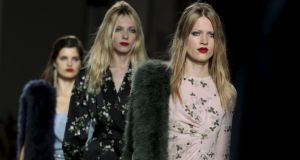 The UK singer-songwriter Alison Moyet, dressed in a black trenchcoat, belting out her 1980s hit All Cried Out with a live 32-piece orchestra, provided the memorable opening of the Burberry show at London Fashion Week, in a lavish event in Kensington Gardens.

Benedict Cumberbatch and his wife Sophie Hunter, Baz Luhrmann, Sienna Miller, Kate Moss and Cara Delevingne were among the front row guests of the British luxury retailer, now a curator on Apple Music. Crowds of onlookers gathered outside in the rain behind barriers.

As the first of the waif-like models bearing monogrammed rucksacks appeared on the runway in mesh stilettos, it was clear that for spring/summer 2016 the message from Christopher Bailey was lace – lots of lace – Chantilly, cutwork, macramé or crochet, covered up with a trench, a duffel or other sartorial riffs on military attire.

The coats, mostly black, were occasionally layered with lace panels or had lapels embellished with gold epaulette motifs, with the added lustre of gold buttons, gold cording and gold chain bags.

Dresses were short and pretty, with patchworked panels, some with sequinned rosettes like stained glass, while others were more Boudicca in spirit, long, slithery, with cross-banded bodices.

Functional Regalia was the title of the collection, executed with Burberry’s customary panache and polish and delivering strong commercial appeal.

The spring collection kept a working girl with a party spirit firmly in its sights – “a beautiful rebel with an appetite for fun” – and it showed in the garden party tea dresses in Wedgwood prints and in casually belted boyfriend jackets with polka dot trousers, chandelier earrings and very high heels.

Unique is the chain store’s more upmarket line. Inexplicably it is not sold in Ireland.