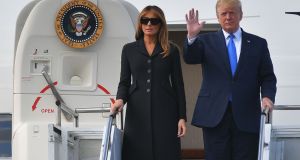 Stepping out at Shannon on Thursday morning, Melania Trump chose a fit-and-flare knee-length coat dress in a sombre black shade, toning down her high-octane style to travel to the commemoration in France of the 75th anniversary of the D-Day landings.

The US president and first lady will return to Doonbeg on Thursday afternoon.

In the most subtle outfit she’s worn in recent days she co-ordinated the sleek stylish look with all black accessories, including oversized sunglasses and sleek black stilettos.

On Wednesday, for her arrival in Ireland, the first lady opted for a pared back but effortlessly elegant look, in stark contrast to her more-is-more ensembles during the UK state visit.

Arriving on the short flight from Southampton to Shannon,the first lady decided not to change out of her cream coat dress. Instead, she updated the look with oversized square-shaped shades as she stepped out of Air Force One.

Keeping to the neutral tones which have become staples of her state-visit style, her cream ensemble was a case of third-time lucky, having worn it for the D-Day commemorative anniversary on Wednesday morning and originally debuting the style at the International Women of Courage Awards in 2017.

The striking, flared coat is by New York based fashion house The Row, founded by actors Mary-Kate and Ashley Olsen, and is the first American brand that Trump has chosen to wear so far on the state visit.

Since arriving in Europe she has been dressing in luxury Italian and French fashion houses, including Givenchy, Celine and Dior.

With the combination of cream tailored coat and pretty hat, many were quick to liken today’s ensemble to an outfit that Meghan Markle would favour. In particular, the off-white wrap coat that the Duchess wore to announce her engagement to Prince Harry.

And the royal associations didn’t end there, as for the D-Day event, the First Lady co-ordinated in a cream creation by Philip Treacy. The Irish milliner has designed an assortment of headgear for the royals, including the Duchess of Cambridge, Duchess of Sussex and Princess Beatrice.