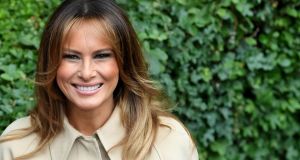 Melania Trump continued her penchant for pricey designer looks for her trip to Downing Street on Tuesday. But, unusually for the first lady, the Celine she chose is a look we’ve seen her in before. Trump debuted the trench coat for a visit to the US federal emergency management agency in Washington, DC, last year. Perhaps she has been influenced by Kate Middleton and Meghan Markle, who regularly recycle their looks.

Dressing for the stormy grey weather in London, she chose to team the to-die-for trench coat, which has practical military-style pockets, with glossy black accessories, including an Hermès crocodile Birkin bag and matching court shoes.

In contrast to previous first ladies, including Michelle Obama, and indeed the royals, who chose to mix high-street and designer, Trump is choosing the more-is-more approach to diplomatic dressing. The rarity of the Birkin bag she carried on Tuesday makes it worth an estimated €60,000.

On Monday night Melania Trump dazzled at the state banquet hosted by Queen Elizabeth. The first lady’s long hair was swept up, and she wore a Dior haute-couture white column dress with elbow-length white gloves – a tricky enough ensemble to keep pristine when the Buckingham Palace menu included saddle of new-season Windsor lamb with a port sauce.

Even before she touched down on British soil for the three-day trip she paid style homage to London, choosing a Gucci silk midi dress, in bright green, orange and red, that featured Big Ben, the Houses of Parliament and double-decker buses for her flight to the UK.

By the time Air Force One touched down at Stansted Airport, outside London, Melania Trump had changed into a blue, white and red Burberry silk pussy-bow blouse, teamed with a navy cape and pencil skirt – which, complete with towering stilettos, made her look like a flight attendant, according to social media.

The sleeveless shirt, designed by Riccardo Tisci, Burberry’s chief creative officer, featured an archive print of nautical ropes and military medals – an apt theme, perhaps, given that the week includes commemorations of the 75th anniversary of D-Day.

Melania selected a navy-and-white Dolce & Gabbana dress for lunch with the royals on Monday. Co-ordinating with Camilla, duchess of Cornwall, who was also in an all-white ensemble, her look reminded some of the late Diana, princess of Wales: Melania’s tailored white pencil dress with navy trim and boater hat was similar to a look Diana wore in Japan in 1986.

But Dolce & Gabbana was a controversial choice. Last year, accusations that one of its Chinese advertising campaigns was racist prompted Beijing to order the cancellation of the label’s first fashion show in Shanghai. Many high-profile people have been steering clear of the scandal-prone brand, but Melania Trump has continued to wear its designs.

Food and drink quiz: Who is the only chef to be sued by a sitting US president?
10