Kilkenny florist is taking a punt on peonies, a favourite of Meghan’s and now in bloom 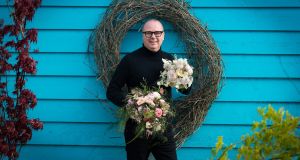 Lamber de Bie with the bouquets he’s created ahead of the Royal wedding. Photograph: Dylan Vaughan

Royal weddings are so exciting but as a florist there is an extra thrill as I try to predict the style and structure the wedding flowers will take.

I’m going to go all out and predict the wedding bouquet that Meghan Markle will have. She is a really interesting and confident individual but there are also many royal traditions that she must adhere to. How will both of these styles be married?

Although she has her own personal style, she appears to have great deference and consideration for the institution which is the British royal family.

Herself and Prince Harry have a very close relationship but they also have a creative streak perhaps not witnessed in previous royals.

This more liberal approach to things may stem from the fact that Harry is sixth in line to the throne whereas William was second in line when he got married and thus more conformism may have been expected of him and his bride.

Liberal or conformist, near or far to the throne, this is still a royal wedding and as such, a great spectacle will be expected and every minute detail will be examined and analysed. Each flower in Meghan’s bouquet will have to have some significance or connection to the royal household, a personal story or a piece of history.

Harry’s mother, Princess Diana’s own bouquet was upscaled in size so that it would not be dwarfed by the volume of her dress. Since then we have seen royals go for smaller and less formally structured bouquets culminating in one which was a loose posy of lily of the valley (each stem of which had to be hand wired as it has such a delicate bloom).

So now to Meghan and Harry (yes, I think as they seem to be quite a modern couple Harry will have a say in the matter, at least to explain the royal traditions and expectations for a royal wedding bouquet). Meghan has a special love of flowers and mentioned that she particularly loves peonies (this she spoke about on her Instagram account before it was deleted), so we can assume there will be peony roses (traditional white or perhaps the palest of pink to break with tradition). The wedding is in late spring and they will just be coming in to season.

The florist who has been chosen by the royal couple is London-based Philippa Craddock, who has stated that she wants the flowers to be local, seasonal and sustainable. Local in this case may mean many of the exquisite flowers from the gardens at Windsor Castle. Here grows the traditional myrtle which has been included in every royal bouquet going back to Queen Victoria and will no doubt be included in Meghan’s.

Another traditional flower in royal bouquets from time immemorial has been the humble but delicate lily of the valley. A quitessentially English flower but one with added significance for a marriage as it represents trustworthiness.

Kate Middleton added some white hyacinth to her bouquet to give that wonderful distinctive scent. Meghan may chose the same flower for scent or she may opt for something a bit less predictable like jasmine, sweet pea or hydrangea. Stephanotis (a delicate white flower that looks like an open daffodil) has been a tradition in royal bouquets and also has a wonderful aroma.

It has been rumoured that foxgloves (which will be in season at the time of the wedding) may make an appearance in the arrangements, adding a less formal touch of wilderness to table designs and the royal florist Craddock also likes to use branches of beech, silver birch and hornbeam, all of which will impart an arboreal and natural element to what would previously have been more formal arrangements.

For Meghan to differentiate her wedding flowers and bouquet, I think she may introduce some colour in the shades of dusty and pale pinks rather than the exclusively white bouquets of other royal brides. Until her personal style of flowers is revealed there is one thing that I can be sure about: it will be the bouquet that will be most influential and copied for many years to come.

The bouquet will be compact in a slightly looser format than we are used to from any of the last royal wedding bouquets with a natural unstructured look.

The flowers will have lots of symbolism both for Meghan the bride as well as traditional symbols that she will want to put into her bouquet out of respect for the royals.

The bouquet Meghan would carry if she came to Lamber

The first significant difference is that I have made her bouquet slightly larger and much looser. I used the myrtle and traditional soft asparagus fern but also included some soft flowing grasses for extra movement.

I used the peony roses, not just the white and paler pink colours but also some of the stronger pink peonies.

I love the David Austin English garden rose and I used these in my bouquet for Meghan and also included some of the very popular variety of pale pink rose called sweet avalanche rose.

At this point I am confident that the lily of the valley as well as the myrtle is a given in any British royal wedding bouquet and I’ve included some hot pink ranunculus flowers to the mix.

Last but certainly not least I have added two flowers that I picked to draw attention to the brown eyes of the bride. Firstly the green/brown helleborus flowers and the amazingly beautiful hanging bell-shaped flowers of the fritillaria meleagris, also known as snake’s head fritillaria.

Suffering from Covid-19 beard? Here’s how to tame it
10