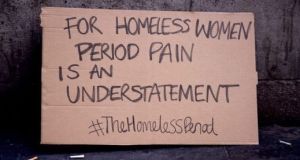 Homeless Period Ireland’s mission is to supply sanitary towels and tampons to the most financially deprived women in our country.

Of all the times of year, Christmas is the very worst for bringing disparities of wealth into sharp relief. There are those lucky people who live with such abundance that their loved ones agonise about what to get for them, because what do you buy for the person who has everything? While there are parents who suffer blistering shame because they don’t have the money to buy their children a gift.

Some of those decent skins who have everything they could possibly want, request that instead of yet another spendy handbag, could they “have” a goat (or similar) to be sent to a low-income family in the developing world? This is very commendable.

But can I ask you to turn your compassion closer to home? To the issue of “period poverty”.

The term refers to women on low incomes being forced to choose between basic essentials – for example between a sandwich or a box of tampons.

Those of us who’ve been lucky enough to have never faced that stark choice find it difficult to imagine what it’s like to go without sanitary protection month in, month out.

But in the words of Claire Hunt, a truly wonderful human who runs Homeless Period Ireland: “Imagine you stepped into a puddle. Your sock is wet, and your shoe is wet. You are far from home, so you have to walk around all day, with your wet sock and your wet shoe with the cold seeping into your skin and bones. Your friends may mock you because you were so silly to step in the puddle in the first place, so you say nothing. Now imagine that happening for up to seven days in a row… and that it will happen again next month.”

A survey in June showed that 50 per cent of Irish women aged 12-19 struggle with the average cost of a tenner a month to buy tampons and sanitary towels. Then there are the homeless women, the women living in refuges and in Direct Provision.

There have been initiatives in some schools and one from Dublin City Council to address this need, but their reach is small.

Homeless Period Ireland’s mission is to supply sanitary towels and tampons to the most financially deprived women in our country. They don’t accept money, all they want are the products.

One of their suggestions is that whenever we buy some for ourselves, we pick up a second pack for another woman who can’t afford it.

Or, because of the season that’s in it, you could ask that, for your Christmas present, a donation be made in your name to Homeless Period Ireland. Their Facebook page lists the drop-off points around the country.

But donations are gratefully received at any time of the year, because remember, periods aren’t just for Christmas.

My misanthropic father would have embraced social distancing
4

A hurley as a sex toy? Ah would you camán out of that
9