Marian Keyes: Here’s how to conceal those dark circles under the eyes

Sudden Wild Enthusiasms: Hiding the shadows with a restrained but deft touch up 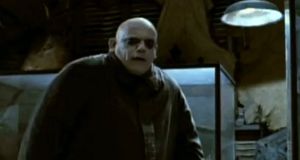 “I will be going as Uncle Fester from the Addams Family.” Photograph: Paramount Pictures via YouTube

It’ll be Halloween on Wednesday and, as always, I will be going as Uncle Fester from the Addams Family. To achieve this look I will simply wear a brown dressing gown and remove my make-up, thereby revealing the massive dark circles which perpetually lurk beneath my eyes.

So on fright night I’ll be effortlessly reducing trick-or-treating nippers to helpless howls of horror.

For something which causes so much angst, no one seems to have a clue what causes dark circles beneath eyes. A gazillion reasons are offered on the internet: a lack of iron, vitamin K deficiency, sleeping on your stomach, allergies, blocked sinuses, genetics, ageing, lack of sleep, medication which dilates blood vessels, rubbing your eyes too much, hyperpigmentation (The skin itself around the eyes being darker than the rest of the face.)

And if a cause can’t be decided upon, it’s even harder to narrow in on a cure. Many spendy eye-creams promise miracles. (Spoiler: they don’t work. Not in my considerable experience, anyway.) There are countless natural remedies – soaking the skin with potato juice, tea or rose-water; making masks from variously aloe vera, honey, coconut oil, or turmeric. Some people literally bleach the darker skin. Others get fillers in the hope that lifting the sunken area into the light will make a difference. Others have the freckles around the eyes lasered off (apparently the pigment makes the area look shadowed.) I’m a hoor for the lasering, I love it – but even though I had this done, it did nothing to vanish my dark circles.

The whole subject is so fraught and baffling that a person could devote their life to it, the way rich types in Victorian times used to dedicate their time and money to searching for the source of the Nile.

I, however, after many years chasing a cure, have concluded, reluctantly, that there is none. Instead it’s about plastering the area with stuff to disguise it.

People think concealers are the answer. But they’re not, not by themselves. It’s no good lashing on a skin-coloured concealer because the dark purpley-blue of the circles will bleed through. Instead the dark colour needs first to be corrected by its opposite number on the colour wheel, which is a peachy shade.

However, once the peachy shade has counteracted the Uncle Fester smudges, I’m usually left with a slightly ashy look. And this is where my concealer comes in.

One final caveat. Because the area around the eyes is prone to lines, thick products will clump defiantly and refuse to leave. A nice light one is required.

Which brings me to Isadora’s Colour Correcting Concealing Wheel in 32 Neutral. It has the peach corrector, two concealer shades in light and medium, (for customising a tone to match the rest of my face) and finally, a highlighter to bounce light off the area. It does the job excellently.

Costs €19.95 and available in chemists nationwide.