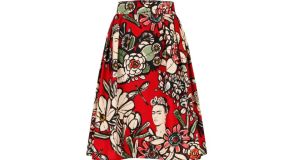 “I used to think I was the strangest person in the world, but then I thought there are so many people in the world, there must be someone just like me who feels bizarre and flawed the same way that I do. I would imagine her and imagine that she must be out there thinking of me too. Well, I hope that if you are out there and read this and know that, yes it’s true I’m here and I’m just as strange as you.”

So said the great Frida Kahlo, once upon a time. Words that have given great succour to me, the founding member of Oddballs Anonymous and many others of “my kind”. If an icon like her felt that out-of-place, there’s hope for us all.

Not that Frida was an obvious icon – she was a woman, of mixed race (German-Mexican), living in a conservative sexist country in the early part of the last century. At six she got polio, resulting in a banjaxed leg. At 18, she was hit by a bus, leaving her plagued by infections and in constant pain for the rest of her life.

But none of that stopped her. She smoked, she boxed, sometimes she drank men under the table. She dressed up as a man for family photographs.

A self-taught artist, her work was unapologetically female, radical and personal. Her subject matter was her lived experience: she laid out abortion, miscarriage and her chronic pain on canvas. This didn’t go down well: at an exhibition in Paris, only two of her paintings were displayed because the rest “were too shocking for the public”.

At a time women were under crushing pressure to be feminine she highlighted her “flaws”, colouring in her already flourishing mono-brow and painting herself sporting a luxuriant ’tache and sideburns. She. Did. Not. Care.

And her look – the lush patterns, the indigenous fabrics, the saturated colours, the statement lipstick, the hair that’s both stark and very ornate – she was beautiful and unique.

Not that she was perfect. Her taste in husbands was appalling and she married rampant womaniser Diego Rivera not once but twice. But even in that, she bucked trends – she always had her own house, and she gave as good as she got on the riding front.

Lately, Fridamania is rampant. This summer the V&A in London is holding an exhibition of her clothes and make-up. If you’re in the market for Frida bags, T-shirts, socks or cushions, you’ve a wide choice on Amazon and Etsy. I’ve been swanking around in this beautiful skirt from Wolf & Badger, and whenever I doubt myself (often), I look at it and Frida gives me an infusion of courage.