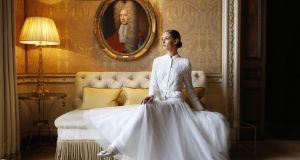 The “Louise Kennedy Roadshow” set off by bus from Dublin on Tuesday to Ballyfin Demesne in Co Laois for an exclusive preview of the designer’s new spring summer collection.

“What I love about Louise Kennedy is the classic femininity of her clothes - and her beadwork is amazing” said Dorothy Moynihan, one of only 30 of the designer’s most loyal Irish clients invited to attend the event. Moynihan is the founder of an electronics company and a long-term fan of the designer. “Her clothes are timeless,” she said on the bus to Ballyfin. “I have a dress I bought fifteen years ago that I can equally wear today”.

The event was the first fashion show held in the luxury hotel, which was named Best Hotel in the Worldby Condé Nast in 2016 and Best Hotel in Ireland last year. One guest was so keen she flew in from Boston to attend.

It turns out Ballyfin has childhood memories for Kennedy, who was a boarder at the nearby Bridgidine Convent in Abbeyleix, when Ballyfin housed the Patrician College, a boys’ boarding school.

“So, it has been a pleasure to see [its restoration] and to present and photograph our spring collection here,” the designer said opening the show in one of the hotel’s magnificent rooms.

The collection, in keeping with its environment, was elegant and luxurious, featuring lavishly embroidered ombre silk kaftans for evening wear, to chunky sweaters in citrus colours – orange, lemon and pink for daywear – and drop-waisted dresses in Linton tweed.

That combination of hot shades worked in suits and tailored separates. Intricate detailing was notable – white beaded cuffs lifted a black jacket, while lavish panels of jet embellished a coat.

Standout items from this big show styled by Catherine Condell were the universally admired long shapely dresses in vivid orange or pink. There were also new shapes, such as the Liv dress in spotted daffodil yellow tulle, perfect for a summer wedding. Meanwhile, a simple white t-shirt worn with a spatter print silk skirt had that effortless look that Kennedy can always deliver. A fine show.