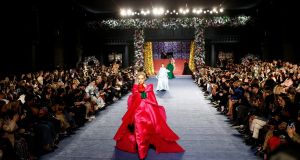 “God Save The Quinn” was the mischievous slogan that embellished the first spectacular silver outfits, weighted head to toe in crystal embroidery and pearls, that opened Richard Quinn’s glittering London Fashion Week show on Saturday night. Held in the Art Deco magnificence of the horticultural Lawrence Hall in Westminster, it was an immediate homage to the London working class tradition of pearly kings and queens.

The young British designer, whose parents come from Co Meath, has become one of the star performers at London Fashion Week. His exuberant floral prints – all made in London – in his signature full-blown operatic shapes have been worn by Amal Clooney (to the Met Ball), Jennifer Lopez, Beyoncé and Kendall Jenner among others, but he has also just launched an affordable collection in collaboration with Depop (an app for preloved fashion with 17 million users), with sweatshirts, slip dresses and jumpers made from leftover fabrics at prices starting at £45 (€54.20).

This show was one of a kind, however, glamorous, extravagant, wildly imaginative, a breathtaking tour de force of colours, amplified rose prints and all kinds of shapes from voluminous to form-fitting.

Many pieces were the stuff of red-carpet fantasy – massive puffball printed skirts swathed in marabou feathers, others in dreamy flyaway layers of emerald green, pale blue or shocking pink silk.

A few were more body conscious, such as a drop-waisted pink corset from which a stiff black skirt flared, a yellow rose for decor. Another was a slimline long floral dress like a cheongsam trimmed with silver.

Fantasy aside, Quinn has proved to be a grounded designer with an informed approach to business, a quality inherited from his father, Patrick Quinn, who is originally from Meath and is the founder of a leading scaffolding company in London. He with his wife Eileen were guests of honour along with the extended Quinn family at the event.

Stylist of the show was Carine Roitfeld, former editor of French Vogue and music was provided by Welsh singer Hannah Grace, with an arrangement of Abba’s Dancing Queen.

In all, an unforgettable show. Pure theatre.

There was another Irish connection at the Regina Pyo catwalk show held in a cavernous carpark near the Tate in Southwark. Pyo is a London-based Korean designer and Central St Martins graduate who set up her label in 2014 and is married to noted Irish chef and cookery author Jordan Bourke from Dún Laoghaire in south Dublin.

Her winter 2020 collection was strong on mixing textures for practical everyday wear in a colour spectrum of browns, beige, cream and chintzy gold and bronze. Typical were scooped brown tops over camel skirts and snakeskin boots, chunky hooded coats belted at the waist and cream jackets tucked into leather skirts, polished looks aimed at the modern working woman.

Power suits with slouchy trousers and knee-high boots were less successful - more equestrian than boardroom in spirit – and a pale yellow trench had more appeal than a technicolour shearling coat patchworked from offcuts. “I am not a fantasy designer. I want each piece to survive the test of time,” says the designer, who is one to watch.

Do you smoke or vape? Here’s why Covid-19 means you should quit right now
10