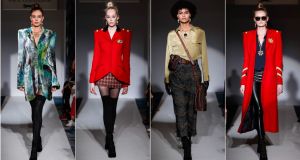 Paul Costelloe was back on form on Monday at London Fashion Week with a confident collection in Simpson’s on the Strand that played to his strengths in ways not always evident in recent seasons. “I thought, what can I do that is different to anybody else?” said the veteran Irish designer afterwards. “So I went back to my tailoring, keeping things simple and taking control again.”

His family were out in force to support him and his daughter Jessica, dressed in a flirty pleated tweed skirt from the collection, revealed that she is to sing the role of Flora in La Traviata in Beirut next month, a big break for the singer.

The same assurance showed in the military-style great coats in bright red with gold epaulettes and blazers edged with nautical gold stripes, while khaki dresses were both utilitarian and stylish – confident classic clothes for confident women. Baby doll dresses in tweed could be more of a challenge for some, however.

Evening wear was at its best when simple, leaving the lovely metallic threaded ballet-length dresses with their l8th century air to speak for themselves. Perhaps not so successful were the narrow spaghetti-strapped velvets or the overly decorated brocades that veered into costume but overall this was an impressive show from Costelloe.

William Costelloe, one of Paul’s son who is a graphic artist and designer, painted screen images of British soldiers marching through London for the show. Explaining the impulse behind the collection, Paul Costelloe said that “it came from a reaction to what is going on not only in London but elsewhere in Europe and it’s a feeling of Rule Britannia, the pomp and circumstance and the feeling of pre-war balls and the tailoring and feminine side – very simple ballgowns along with a military look, a kind of farewell to arms.

“Over here there is a definite feeling of not knowing what is going to happen next. I am looking at it from a distance and it is a moment in history that we are living through, so the collection is a bit of nostalgia, since England is going to divorce Ireland and a moment to display my tailoring skills carried through into a more romantic mood”.

The young London-based Wexford designer Richard Malone sent out a collection challenging accepted norms of so called “good taste”, flushing out his guests for an early 9am start. It didn’t disappoint. His admirable commitment to sustainability is ongoing and his use of waste materials to make desirable clothing continues to be innovative – labour intensive handwork being his signature.

That made for some striking pieces – a zany oversize red, white and blue coat, another in blue with flying yellow fringing, shaggy turquoise and bright red dresses and oversize blue bolero-style coats, topping flared trousers. The show notes explained that his striped fun-fur stoles were made from repurposed dog beds, frock coats from workwear twills typically found in school uniforms. Bra-cups sitting away from the bodice (evident in other collections too) were deliberately “artfully awkward”. Handwoven fringed silks and brushed Scottish wools were aimed, according to the designer, at those “who might have to take their kids to school with a raging hangover”.

Colours and prints stood out and a feature of Malone’s style is the way he shapes with ruching and draping and it is surprising to discover that his dresses are cut from one metre of fabric and moulded by hand. One of his loveliest was in poison green silk, another in neon red and blue, while his use of laddered knits, frayed silks and hand-painted mohairs spiced up the textures.

Nothing could have contrasted more with Malone’s family livingroom set than the long elegant galleries in the National Portrait Gallery where Erdem, a much favoured red carpet designer whose fans include Meghan Markle, Michelle Obama, the Kate Middleton and Keira Knightley among others, staged his sumptuous show.

For a designer who loves to echo the spirit of the time in his work, with this collection he took his cue from a princess in 1960s Rome with a vast inheritance of ancestral palaces and castles but who has been utterly changed by a visit to 1960s London. The contrast, translated into clothes, was a play between voluminous veiled garments with long, floor-sweeping trains versus tight jewelled trouser suits (some green with jet beading) or more undone skirts and cardigans. It was a clever trope for a magnificent collection of the most exquisite loveliness.

Blue metallic brocades seemed to have their own light and long-sleeved ballerina dresses came in sumptuous brocades and the frothiest black and white prints. One dress had a tight brocade bodice and a full gingham skirt in the finest tulle. This was a dreamy, romantic collection, full of the grandeur of the surroundings in which it was shown.

The last main show of the day was J W Anderson, the Northern Irish designer in charge of both Loewe and his own brand, making a forceful statement about volume in this collection from every perspective – from the onion-shaped grey separates to the longest, roomiest trousers in London. Models traversed a porridge cream carpet in flimsy kitten heels with only flying tulle bows to anchor them.

“I employ more than 50 staff,” he told a recent interviewer, “and my job is to make sure that we put stuff down the catwalk that sells and that in turn employs people”. Big tweed capes, oversize coats anchored with belts, capacious dresses overlaid with long shawls or shaggy sleeves drove home the point. Best of all were the long tunics worn over those wide-leg trousers and a handsome green and black belted full skirted caped dress. The styling was noticeable – chunky gold chain neckpieces, elevated jockey caps and tiny handbags.

He was best when at ease and upbeat with a happy-go-lucky black and blue dress with flying panels of yellow, red and orange flounces at the waist, on the hem and on the cuffs worn with soft medieval-style boots made for walking.