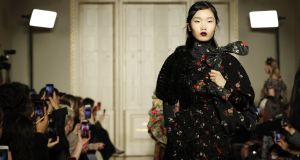 A model walks the runway at the Simone Rocha show on Saturday during London Fashion Week. Photograph: Luke Walker/BFC

Irish designer Simone Rocha, whose London Fashion Week show was staged at the elegant rooms of the Royal Academy of Arts on Saturday evening, described her collection, in her usual terse way, as highlighting intimacy, privacy, security and femininity – underwear and outwear.

For a soi disant emotional designer with the ability to explore femaleness from within and who has always drawn inspiration from the artist Louise Bourgeois, this was a particularly poetic collection that emphasised traditional craft techniques such as tapestry and embroidery in the most beautiful, hear-tstopping and ethereal way.

Rocha’s use of veiling – the idea of conceal and reveal – over everything from peep-show lingerie to belted overcoats made its own point, as did the contrast of hard and soft – baby doll satin dresses with blocky shoes or richly embroidered voluminous dresses of 18th century magnificence grounded with blocky boots or pearl embroidered flats. Rocha certainly knows how to stir the female heart with her Midas touch, whether with a gold sequin dress, glittering gold earrings or a small gold handbag.

Two Irish designers showing their mettle at the weekend were Stacey Wall from Cahir, now based in London committed to sustainability and recycling materials and Katie Ann McGuigan making her London Fashion Week debut with a collection based on visual images from Japanese biker subculture. What this meant in reality was a skilful mixture of prints used imaginatively and daringly with sporty nylons and floaty tulle skirts.

Earlier, the first to show a gutsy collection at London Fashion Week this weekend was Alexa Chung, the popular Hampshire-born star known for her trend-setting personal style but also sharp business acumen.

Having made a successful debut last season, she is getting into her stride as a designer with a confident, polished collection called Off the Grid that’s bound to be another winner.

In this she imagined a group of women in the rugged Big Sur “broken off from the city” in black leather and black satin, in prairie style ruffle dresses or chunky tweeds.

Her modern takes on traditional tailoring and fabrics was fresh and sassy, the sort of clothes to attract a modern girl about town, like a daywear tuxedo with jeans, a slim navy pinafore, a sharp corduroy suit or a curvy satin dress all with that easygoing tomboyish style that has become her signature.

With his usual masterly control of colour and using sportswear as a starting point albeit with silk and crepe, Jasper Conran sent out a sophisticated collection of monastic dresses and angled hem ensembles in offbeat combinations of shades like blackcurrant, deep blue and chocolate in organza, crepe and tulle that looked elegant - on wafer thin models.