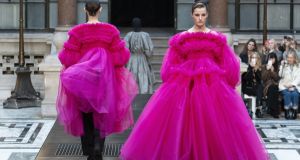 The British Fashion Industry hates Brexit - according to the British Fashion Council (BFC) 90 per cent of designers voted Remain. So it will be interesting to see if any designers inject an anti-Brexit sentiment into their London Fashion Week previews of spring 2020 fashions from Friday 13th to Tuesday 17th September.

This time there’s a difference, London being the first to open its doors to the public “to increase engagement and reach new audiences” according to the BFC (British Fashion Council). The price of a ticket to any one of the six runway shows in question, three on Saturday and three on Sunday (House of Holland & Self Portrait) is £135 (€149), with front row seats £245. The tickets will also allow access to the BFC Positive Fashion Exhibition and a Positive Fashion talk.

Though London Fashion Week has been an industry event for press and buyers since 1983, the number of designer showrooms has decreased over the years and catwalk shows, over 100 last February, are now down to 45. New requirements to contain growing requests from bloggers and digital influencers demand that they have a minimum of 35,000 Instagram followers, YouTubers must have an average of 50,000 viewers per fashion related video and bloggers over 15,000 unique visitors monthly.

There is also a growing awareness of the issue of sustainability in fashion with campaigners highlighting the fact that 300,000 tonnes of clothes are dumped in UK landfills every year. The BFC’s Positive Fashion Exhibition, an initiative to champion best practice in the industry will focus on its three fashion pillars – sustainability, equality/diversity, craftsmanship/community – highlighting some of the positive changes being made.

In a place where the people buy more garments than any other in Europe – and throw away 11 million items a year – voices of change are growing. They include the UK protest group Extinction Rebellion, which would like to shut down London Fashion Week, while UK model Stella Tennant has launched a campaign with Oxfam asking consumers to abstain from buying new clothes for 30 days and focus on recycling instead.

With the impact of a no-deal Brexit on the British fashion industry estimated by the BFC to cost between £850 million and £900 million, all this should all make for an interesting week – not to speak of what the spring trends may forecast.