Leggings row: It’s about women, their bodies and the discomfort of seeing too much of them

Last week leggings set off a firestorm in the US. Why does this clothing get people so riled up? 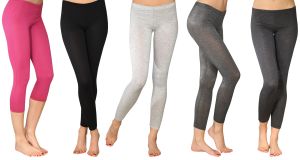 When did leggings make the leap from garment to cultural lightning rod? For what are essentially stretchy footless tights in a seemingly endless array of patterns and colours, they have been an unexpected source of controversy.

The latest uproar came last week. Maryann White, the mother of four sons, wrote a letter to the Observer, the school newspaper for both the University of Notre Dame and the nearby women’s college St Mary’s, asking female students to ignore fashion and stop wearing leggings. It was for their own as well as the greater good, she suggested, in part because leggings made it hard for men to control themselves.

The you-wear-it/you’re-asking-for-it implication of the letter, not to mention the sheer idea of censoring clothing, set off the predictable firestorm of protest, both on campus and off. For two days students wore leggings in a show of group defiance, there was a #leggingsdayND hashtag on Twitter, and assorted men and women posted photographs of themselves in solidarity with leggings wearers.

By Friday the Observer had another piece, this one from the editors in response to the furore, saying: “Having received over 35 letters to The Observer, in addition to the countless verbal comments, tweets, memes and class discussions about Monday’s letter, we have been astonished by the conversations the leggings piece has sparked.” Meanwhile, those wider conversation continued over the weekend.

This follows a 2017 United Airlines incident when two teenagers who were “pass travellers” (a category that includes relatives of airline employees) were prevented from flying because they were wearing leggings. Observers complained, social media got up in arms, and the makers of leggings had a field day; Puma, for example, jumped into the fray and burnished its image by offering a 20 per cent discount on leggings to anyone presenting a United ticket. And that in turn punctuated the endless debate among parents and schools and students that can be summed up as “leggings-are-not-pants/yes-they-are”.

In general this existential interrogation of the soul of a garment (because, really, that’s what it is) centres on women, women’s bodies and the general discomfort with seeing too much of them, or believing you are.

A woman wrote a letter to female students asking them to stop wearing leggings because the sight of leggings ‘made it difficult for young guys to ignore women’s bodies’ so we decided to wear ours today as a reminder that women are not responsible for men’s actions #leggingsdayND pic.twitter.com/zdmXeU7aTI

That’s certainly where White was going with her letter, and it’s generally the political offence used by those who are on the pro-leggings side: How dare you accuse me of dressing to seduce (an argument that has particular resonance in the era after #MeToo).

But leggings began their rise to wardrobe domination with the advent of comfort culture: the post-casual-Friday turn-of-the-millennium move away from formality that picked up steam with the rise of fleece-wearing hedge funders, the fall of Old Wall Street and the fetishisation of Silicon Valley’s hoody- and Teva-clad geniuses, and became even more pronounced under the influence of the wellness movement.

Leggings also function differently for different age groups: for Gen Y, they tend to be lifestyle signifiers that have more to do with health and activity than, say, everyday workwear; for Gen Z-ers, who largely reject uniformity and traditional labels, they are simply a basic, the equivalent of jeans. They are something you put on without thought.

Which is to say, leggings are about a lot of things, and sex may be the least of them – if sex plays any role at all.

One thing that was striking about the Notre Dame protest was the rejection of what they saw as the traditional gender assumptions involved. Leggings are not the sole province of the siren female was the idea.

In their editorial, the Observer’s writers asked, “Why has the legging controversy generated a larger impact than other controversial topics? Students and community members have spent hours debating the merits and faults of a popular clothing choice. But where is the willingness to speak up about other issues with substantial policy implications, legally and on campus?”

A great gotcha of fashion is that what may appear superficial or unimportant (leggings!) is, in fact, representative of a more complicated, harder to express reality (identity)

The truth is, it’s possible leggings may be simply standing in for those other issues. One of the great gotchas of fashion is that what may appear superficial or unimportant (leggings!) is, in fact, representative of a more complicated, harder to express reality (identity). This is what gives clothes their power.

As a result, what the leggings uproar may have exposed is not so much anyone’s physique per se but rather a cultural fault line that runs through generations. This historical pattern includes miniskirts and jeans, Mary Quant and James Dean, and garments that seemed egregious and inexplicable to what is generally referred to as the establishment but play a key and highly visual role in upending norms to make way for the next.

But judging by Lululemon’s recent results, which saw net revenue rise 21 per cent in the third quarter of 2018, and the fact that part of Levi’s much-heralded IPO was attributed to the “stretch” now included in jeans to cater to the leggings market, this “popular clothing choice” (as the Observer labelled it) is not going away any time soon. All this suggests that the Notre Dame uproar may be not a fluke but a harbinger. – New York Times