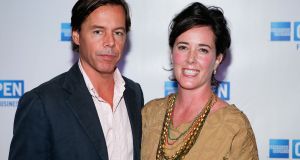 Andy Spade, the husband of designer Kate Spade, who died of what police characterised as suicide this week, said Wednesday that she had suffered from severe depression and acknowledged that they had been living apart for the last 10 months.

He said there were no plans to divorce. Andy Spade was speaking publicly for the first time since her death. Kate Spade, with her husband and business partner, built an idea about a handbag into what became a billion dollar brand, marked by an optimism that resonated deeply with many women for almost three decades. Andy Spade said that although his wife had suffered from anxiety at points during their relationship and marriage, her serious bouts of depression began only about six years ago, at the age of 49. He also said that she had been regularly seeing a private doctor and was taking medication for her disease.

“There was no indication and no warning that she would do this. It was a complete shock. And it clearly wasn’t her. There were personal demons she was battling,” he said. Andy and Kate Spade, who married 24 years ago and started the brand Kate Spade together in 1993 and the brand Frances Valentine in 2016, had been unofficially separated for just under a year. According to Andy Spade, they maintained different apartments a few blocks from each other but continued to take vacations together, and their daughter, Frances Beatrix, split her time between them.

She was with her father the night of her mother’s death, and, Spade said of his wife: “We were in touch with her the night before and she sounded happy. There was no indication and no warning that she would do this.”

He also said neither he nor anyone else in the family had been shown the note left by Kate Spade but had read about it in media accounts. “I am appalled that a private message to my daughter has been so heartlessly shared with the media,” Andy Spade said. According to police sources, the note addressed the couple’s daughter, expressing that she should not feel at fault. Reports in TMZ and the New York Post speculated that it was Andy Spade’s desire to end his marriage that caused his wife’s depression, while Kate Spade’s older sister, Reta Saffo, told The Kansas City Star that Spade’s suicide was “not unexpected” and that her sister had refused to get treatment for her depression because of fear it might damage her brand.

However, Kate Spade’s older brother, Earl Brosnahan, said Saffo had been estranged from the rest of the family for more than 10 years, to the extent that she had not attended their mother’s funeral in 2010. Although he acknowledged Spade had been in sporadic contact with Saffo in recent years, the only one of the six siblings to speak to Saffo, he said he was taken aback that Saffo “should surface now with very definitive statements that I think are grossly inaccurate” and attributed the contact between them to Spade’s personality.

“It was Katy’s way to be accessible and available to everyone,” he said. Both Brosnahan and Elyce Arons became close friends with Spade as an 18-year-old at the University of Kansas and later became her business partner in both Kate Spade and Frances Valentine said they had been aware of Spade’s depression and the separation in her marriage.

Brosnahan said he and Spade had discussed “her sadness, which is what we liked to call it.” He said he became aware of it about 18 months ago. Although he said he and his sister often spoke several times a day, it sometimes became difficult to get her on the phone. However, he declined to characterise her state as either manic depression or a lifelong condition. He said that he had dinner with her a week before her death and that “she was still talking very much about the future and collaborating with Andy on projects for Frances Valentine.”

Brosnahan said they had not discussed the subject of divorce, although he did believe some of her sadness derived from having grown apart from her husband. Arons, who worked with both Kate and Andy Spade during the period they were separating, said they continued to work well together. “It was a time in the marriage when it was right for them to be apart,” she said. “They both agreed to it. They loved each other very much.”

“Katy was very happy most of the time, the funniest person in the world, and sometimes she would get really sad,” Arons continued. She said she watched her friend’s condition develop “slowly, over time. We would talk a lot about it and end up laughing,” she said.