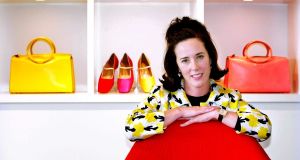 Designer Kate Spade poses with handbags and shoes in 2004 from her collection in New York. File photograph: Bebeto Matthews/AP

In a fashion fan’s mind, the name Kate Spade immediately transforms into “kate spade”, spelled out in New Baskerville typeface, underscored by “NEW YORK” and surmounted by a nifty little deck-of-cards ace. That was the logo on the labels inside her first handbags, which were so free of surface detail, without plaques, grommets or zips, that they looked almost too austere; so, before launching them at a 1993 trade show, she stayed up all night hand-sewing the labels on to their outsides. From those bags, put together without a business plan or bank loans, there emerged an extraordinarily successful brand.

The designer, who has taken her own life at the age of 55, was at the time of sewing Katy Brosnahan; she did not marry her partner, Andy Spade, until the following year, when the firm had coalesced enough to rent a rat-infested office in Tribeca, New York - they wed on the premises.

She created, he marketed, and their approach was all-American: make what you want but can’t find; keep it simple - the initial bags, especially a definitive black nylon specimen, were as stripped-down and functional as a Jeep; have fun with novelty, but never let it get dumb.

It mattered to her apparently carefree identity that her family was Irish; Katherine Noel, born on Christmas Eve in Kansas City, Missouri, was the fifth of six children of Earl Francis Brosnahan, who was in the construction business, and June Mullen, once a flight attendant on Braniff Air- way’s glamorous Caribbean-South American routes. June’s in-flight uniform of up-do, sharp-shaped shoes and box bags permanently influenced her daughter’s taste. Not that the girl wanted a fashion career; she studied journalism at the University of Kansas, then Arizona State University, where she met Andy as they worked at college jobs in a Phoenix store.

She fetched up in Manhattan after a post-college trip to Europe, down to her last seven dollars and sleeping on a friend’s couch. A temp firm matched her to a gofer vacancy on the Conde Nast magazine Mademoiselle, where she rose over five years to be senior fashion editor, specialising in accessories. (Andy joined her in New York as a copywriter for an ad agency.)

She grew exasperated with the bags available - high-end luxury; big designers heavy on the logo; chic if ditsy boutique lines - and returned to an idea from her college years, to create her own.

Slowly and secretively, drawing on Andy’s savings and their credit cards, she developed that idea through prototypes mocked up with paper and sticky tape. They both sourced raw materials, including hessian from a potato-sack maker; auditioned Brooklyn machinists to make up the samples; and, when the department stores Saks Fifth Avenue and Neiman Marcus upped their orders from 1,000 to more than 20,000 items in 1995, found and nursed American factories into urgent delivery.

Fashion in the 1990s was not often locally supplied, with small production runs, short turnaround times and the designer in total control. But that is how the Spades did it and it worked; customers responded to the practical, classless bags with unexpected affection.

A Kate Spade shop opened in SoHo, Manhattan, in 1996, and the couple traded up to rodent-free offices. By 1999, the label had such wide appeal that Neiman Marcus bought 56 per cent of the firm, encouraging its expansion into stationery, shoes, clothes, household goods and lifestyle books. Spade’s book Contents (2000), on what lurks within bags, is sound social as well as visual history. The shop grew into an international chain. Andy devised its advertisements, with accessories as set-dressing for an agreeable, often familial, life; the Spades were their own best ads. (And the bags achieved their proper place in the Cooper Hewittdesign museum in New York.)

In 2006, Neiman Marcus sold the company on to Liz Claiborne, ending the Spades’ considerable control over decisions, and in 2007 the couple sold their 44 per cent to Claiborne, too, and walked away, leaving Kate Spade with no rights to “kate spade”.

Andy applied his skills to other American brands; Kate withdrew into domesticity, raising their daughter, Frances Beatrix, born in 2005, and chairing the board of the New York Center for Children.

When she returned to work in 2016, she concocted a fresh brand, Frances (after her daughter) Valentine (after her grandfather), legally adopting it as her own name: “I am the designer formerly known as Kate Spade. I am Kate Valentine.”

The approach was again cautious and self-funded, though the Spades started this time with shoes and sold them online, with limited retail exposure. Only a few longtime collaborators were on the payroll and neither Spade wanted to repeat their old runaway success. They wanted just the satisfaction of making.