Arguably the most influential German man in the world, his life story was his greatest creation 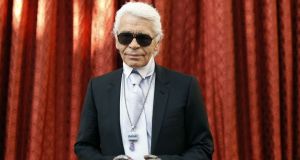 The fashion world and Germany is in mourning for Karl Lagerfeld, their most famous fashion son. The 85-year-old fashion designer and creative director of Chanel died in Paris on Tuesday after a period of ill health in recent weeks. He had missed two of Chanel’s haute couture shows in Paris in January. He was admitted into hospital on Monday night. The cause of his death is not yet known.

His own life story was Lagerfeld’s greatest creation as he shrouded his true age and early life in mystery. He liked to put about stories about himself, such as how a fortune teller told his mother her son would be a big wheel in the church, possibly a bishop. Instead he dedicated his life to the church of fashion and, with tireless creativity and self-promotion, became the long-standing primate of the Chanel empire.

After six decades, he was the last of his post-war generation still working in the fashion business. Virginie Viard, deputy artistic director of Chanel, will become chief designer of the fashion house following his death, a source at Chanel said on Tuesday.

For decades a dominant figure of Paris haute couture, Lagerfeld made a successful transition as ambassador during the transition to the era of global fashion. Though Lagerfeld was rarely thought of internationally as German - he preferred to cultivate his Francophile image, friends and biographers insist his homeland remains an intrinsic part of his character.

His high-collared aesthetic of later years channels 19th-century aristocrat Count Harry Kessler. His northern German industriousness was clear in his staggering work ethic, turning out new fashion right to the end. After the retirement of Pope Benedict, Karl Lagerfeld had claim to be the most influential German man in the world.

“I was wasted on dismal postwar Germany,” he said, explaining his move to France.

His later Paris triumphs were a far cry from sold middle-class beginnings in Nazi-era Hamburg. Lagerfeld was born in Hamburg in September 1933 - he claimed 1935 - and spent the first year of his life in a villa overlooking the Elbe in the wealthy suburb of Blankenese. His father, Otto, was a self-made man, first with his own import-export company and later as general manager of an American condensed milk brand in Germany called Glücksklee. That wasn’t glamorous for Karl who, in later life, put about a rumour that he was the heir to the Nivea fortune.

As a youth Lagerfeld’s lack of interest in either sport or girls combined with his well-maintained clothes and luxurious hair - this in the era of Hitler Youth uniforms and tight haircuts - only amplified his outsider and loner status. Lagerfeld says he devoted his days after school to drawing and daydreaming.

Asked at a work event at his father’s factory if he wanted a beer, the 18-year-old Lagerfeld reportedly replied: “I only drink champagne.”

He looked like an Italian hustler. He was very Milano... always too much

He said later of his formative years: “I had the feeling: ‘It doesn’t matter what you do - you’re compelling!’ I thought I was sacrosanct.”The door to the fashion world opened in 1954 when his design for a coat won one category at the International Wool Secretariat. The winner of first and third prizes in the dress category was Yves Saint Laurent.

With a characteristic mix of self-effacing exaggeration, Lagerfeld told a German documentary in 2014 it was “complete coincidence” that his design was picked “from 200,000 entries”. Other reports put the total number of entries at 6,000.

After his win, Lagerfeld moved to Paris where he cruised around in a cream Mercedes convertible - financed by his father, along with the rest of his life - and began to stitch together his greatest creation: the Lagerfeld myth. The ingredients: self-generated gossip that he was an heir to an industrial fortune, and an outrageous appearance of bronzed, muscular physique, high-heeled leather ankle boots, big black hair and pouting lips.

“He looked like an Italian hustler,” said one contemporary. “He was very Milano... always too much.”

While he built his brand, Lagerfeld’s fashion career didn’t take off as quickly as that of Yves Saint Laurent. After unremarkable stations in the houses of Patou and Balmain - where Lagerfeld says he “learned what not to do” - the designer threw himself into the world of ready-to-wear fashion, then viewed as a poor relation to couture.

From 1964, at Chloé, founder Gaby Aghion helped Lagerfeld streamline and simplify his style - all with an eye on commercial success.

In 1965 he helped the five Fendi daughters rebrand the Italian company founded by their father, after convincing them that “bourgeois furs had no future”.

Though he has remained a freelance designer, the modern Lagerfeld myth is inextricably linked to his arrival, 30 years ago, at Chanel.

“People told me ‘don’t do it, it’s dead, kaput’. The reanimation of old brands came later,” said Lagerfeld in later life.”Since the death of Madame Chanel ... the brand had cultivated a certain respect but cultivating respect is the road to ruin. Respect is not possible in fashion. In fashion you have to sell your own mother.”

According to Lagerfeld, Chanel owner Alain Wertheimer told him he didn’t like the company he had inherited and gave the designer a chance to turn it around but, if it didn’t work out, he was ready to sell. “They allowed me to have a contract to do what I want, where and when I want,” said Lagerfeld. “The result you can discuss with the accountant.”

The Chanel accountants are, no doubt, in mourning. On Lagerfeld’s watch, Chanel expanded from a high-fashion house into a multinational selling jewellery, watches and cosmetics, and with 310 shops worldwide. Privately-owned, and not obliged to release public accounts, it nevertheless published figures last year for the first time. In 2017 it had revenues of $9.62 billion for 2017, an 11 percent rise from a year earlier, with profits of $1.79, up nearly a fifth on the previous year.

The Chanel transformation mirrors the rise of the global luxury industry, masterminded by Lagerfeld, showed how his business nose was always been as strong as his fashion sense.

For those who couldn’t afford his Chanel creations, he opened a webshop selling clothes under one of his own, lower-cost labels.

“We are living in a world where all the old criteria of exclusivity are nonsense,” he said, launching the online offering in 2014.

Lagerfeld’s embrace of mass-market fashion is not as revolutionary as it seems. For decades Lagerfeld has designed - often anonymously - for German retail chains, while one of his earliest clients as a freelance designer was French supermarket chain Monoprix.

The level of perfection Lagerfeld demanded was clear from the team that precedes him at all times, polishing the table he will use or vacuuming 100 times the carpet on which he will soon stand.

Suzy Menkes, fashion editor of the International Herald Tribune, told the documentary-makers that, even if she doesn’t like everything he does, she would prefer Lagerfeld any day over “people who just coast along being boring”.

In his eight decades the only notable relationship Lagerfeld had was with Parisian dandy Jacques de Bascher, who died of an Aids-related illness in 1989.

Since then, Lagerfeld said he lived “wonderfully” by himself - later with cat Choupette, who he turned into a social media superstar. As for human relationships, he said older couples should concentrate on friendship with each other and pay third parties for physical affection - without saying whether he follows his own advice.

Famously controlling of his image, author Alicia Drake earned King Karl’s wrath for suggesting in her book The Beautiful Fall, a dual biography of him and Yves Saint Laurent, that everything about Lagerfeld “was calculated to appear larger than life”.

She documented his voracious appetite for inspiration and praised his Chanel couture collections as some of the greatest in the history of the house. But Drake also analysed his calculating deployment of charm and regular purges of friends from his inner circle.

The Beautiful Fall also explored the regular and dramatic changes to Lagerfeld’s physical appearance and image, each eclipsing the last. She documented the often hilarious inconsistencies in what she calls Lagerfeld’s “eccentric Wunderkind” version of his own life. But what annoyed the designer most was her description of his family background as “hard-earned middle class”.

Lagerfeld viewed this as treachery, after decades cultivating a more glamorous myth, and launched a lawsuit claiming the book was an invasion of his privacy. He demanded Drake pay damages and a fine and that the book be banned in France. Lagerfeld lost and the case only drew attention to the book.

Perhaps his the controversy in a long life of controversies was his public take-down of Angela Merkel’s fashion sense and her refugee crisis policy.

He was scathing of her tight-fitting blazers, saying the German “should have something designed specially for her special proportions but I hear she wants no advice”.

In a 2017 political cartoon published in a German newspaper, he blamed Merkel’s decision to let more than one million refugees into the country since 2015 for the rise in support for the far-right Alternative für Deutschland.

Lagerfeld’s cartoon showed Adolf Hitler telling Merkel: “Thank you very much for inadvertently allowing my descendants to be represented in parliament.” A distraught Merkel asks: “What have I done?”

That intervention cooled his reputation among some Germans but King Karl clearly couldn’t care less. Proving the old adage that there was no such thing as bad publicity, the German-born fashion icon remained militantly anti-nostalgic and unsentimental to the end: a pop-culture sponge who never looked back, always forward.