Jodie Kidd: ‘I thought I was going to die the whole time’ 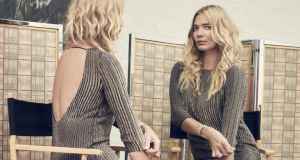 Jodie Kidd is the face of TK Maxx’s Give Up Clothes for Good drive, in support of Enable Ireland

“As they say a lot in Ireland, you throw your heart over first and the horse comes later. And that’s very much kind of my philosophy in life.”

Jodie Kidd does nothing by halves. She opened shows as a model for John Galliano, Alexander McQueen and Chanel, and she has raced at Silverstone, played polo for England, opened a gastropub and appeared on everything from Strictly Come Dancing to her own US TV show, Fashion Avenue.

Kidd, famous for her statuesque appearance and golden locks, is the face of TK Maxx’s clothing drive Give Up Clothes for Good in support of Enable Ireland. The initiative asks people to donate pre-owned quality clothes, accessories and homeware to their local TK Maxx. Since its conception in 1997, the campaign has raised more than €3 million for Enable Ireland in aid of children and young people’s disability services.

Kidd, a parent herself, sells the campaign with such zeal, she could convince the most reluctant punter. “There is always something in your wardrobe that either didn’t fit right or didn’t look right or that you’ve worn enough and by handing it in you can help many children,” she says.

Her willingness to encourage corporate social responsibility should not be dismissed. TK Maxx is just a single player in a multi-billion dollar fashion industry becoming aware of the social impact and marketing potential attached to philanthropy. “You know we can climb mountains, and swim across channels and do things like that, and raise a tiny amount compared to these big businesses. I think it is very important that they are all standing up because they make such a massive difference,” says Kidd.

“I kind of came on the scene in the late 1990s and 2000s. There was such a cool kind of movement with Galliano, with Lee McQueen it was like the Brits were dominating. And boy we did have some fun!” she says.

As her career in fashion progressed, Kidd grew increasingly anxious. “I was young, and I didn’t know what was going on, and I just thought I was going to die the whole time,” she explains. Kidd feels the rejection she endured as a model contributed to her anxiety. “I think modelling was the first time where I turned up early, I went to bed, I arrived with everything looking good. I did everything that they needed, and then someone would come in and look like a complete god knows what and they’d get the job, and you’d be like – what have I done wrong?

The scrutiny she experienced at the hands of the British media is comparable to the onslaught of online abuse modern teenagers regularly experience. “I certainly went through a hell of a lot of s**t as a teenager with the press,” she says. Television presenter Lorraine Kelly famously said she looked like a “sick, anorexic giraffe”.

Kidd’s great-grandfather started the Express, and so she was already media savvy. “I was lucky to be born into that, whereas young girls that are not ready for that, that are not prepared for the online bullying, or constant images of what everyone thinks is perfect. It is a very worrying time, and I think there will be a point where it will completely implode,” she says.

Kidd came to prominence in an industry notorious for championing tall, thin, white, able-bodied females, and little besides. However, this season she senses a shift. “I think it is really lovely that you’re seeing all different sizes, all different ethnicities, you’re seeing everyone from different walks of life,” she says.

“I can’t say bad things because it was my industry for so many years, but as a consumer, I look at a fashion, and I go ‘God I really love that outfit’, and you go especially to that shop, and it just doesn’t look the same on you as it does on that imagery,” she says.

Kidd feels the industry’s sudden diversification is a response to the selfie-taking, filter-obsessed world of 2018. “I think with so much social media, Instagram, Kardashian, everything is so false, and everything is so perfect, but we’re not stupid. I think we’re now yearning for proper, real, tangible things and images, and the fashion world is answering that, which is brilliant,” she says.

Her career is striking, not least for her success, but her fearless approach to conquering male-dominated fields. As she retreated from fashion, she began to ride horses again. By the end of that year, she had joined the British Polo team. “I completely, fully immerse myself in these things!” she pauses, “I don’t know really know why I went into such male-dominated things”.

Although Kidd admits the transition from the catwalk to driving cars for Maserati had its difficulties. “I was the only woman in a series of, I don’t know, 24 other cars,” she explains. “They were very nice at the beginning, all the other drivers and pro drivers, and then about a year into my first series I started getting better, and better, and better. They couldn’t overtake me, and I started actually overtaking them. And then they just were like hitting me off the road, it was embarrassing,” she says.

Kidd omits a confidence which has little regard for gender barriers. “If I wasn’t so good at racing cars or if I wasn’t good at playing polo and I couldn’t be shoulder to shoulder with them I wouldn’t have done it. I would have gone ‘it’s too tough, it’s just a brick wall’.”

Her response to equality movements like “Times Up” and “Me Too” is concise. “It’s about bloody time,” she says. “I think it is very important that women have a voice, and you know I’ve been very much a woman’s advocate through doing sports, from golf, playing polo and racing cars, so for me it is wonderful that there is this kind of movement where people are being listened to.”

Before the interview concludes, a crucial questions remains – what would the last supper of a former supermodel turned gastropub owner consist of? “Oh my god,” Kidd exclaims, “it would probably be a good proper roast chicken, with roast potatoes, cauliflower cheese, and greens from the garden, so good”.

To find out more about Give Up Clothes for Good see tkmaxx.ie

Comfort eating your way through the pandemic? You’re not alone
6