Jennifer Lawrence dress controversy: She looked frozen and out of place 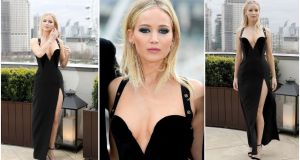 Jennifer Lawrence wearing a Versace dress at a photocall for her film Red Sparrow on London on Wednesday. Photograph: John Phillips/John Phillips/Getty Images

For a moment there Hollywood women were doing so well with their black dress protest and then along came Jennifer Lawrence and put her five inch heels in it.

Feminists are furious with her and here’s why: on a cold winter’s day she chose to pose in a slashed to the waist and cut the hip dress alongside male colleagues - including Jeremy Irons - who were all tucked up in winter coats, jackets, scarves and boots looking curiously co-ordinated - like an elderly boyband. Jennifer by contrast looks frozen and wildly out of place or rather, as the feminists have it, exactly in the place women are expected to occupy in the movie business - ie as naked as possible, regardless of #metoo.

At the very least you’d think one of them could have given her their coat but the message from Jennifer is loud and clear : she didn’t want any goddam coat because it would have taken away from THE DRESS.

Hitting back at critics she posted this on Facebook “That Versace dress was fabulous, you think I’m going to cover that gorgeous dress up with a coat and a scarf? “

But she’d arrived for the shoot wearing a pretty fabulous coat and sunglasses that made her look way cooler, so what was the need to take it off? That’s me talking.

This is such a quietly depressing (and revealing) image. Not least because I've been outside today and it's bloody FREEZING. pic.twitter.com/BRnmgKJ5wY

“I was outside for 5 minutes. I would have stood in the snow for that dress because I love fashion and that was my choice.” Jennifer hit back, saying “This is sexist, this is ridiculous, this is not feminism.”

Lawrence went on to say she felt highly offended at the criticism that started when British journalist Helen Lewis tweeted the image, calling it “quietly depressing (and revealing)” on a “bloody freezing” day.

It does beg the question all over again…why do women in the movies mostly have to wear less clothes than men? Why can James Bond always keep his Savile Row suit on while the Bond girls always end up in a bikini? Comedian Deirdre O’Kane put it this way at the IFTAs, referencing the Irish Film Board’s aiming for 50/50 gender parity. “We know that the men will be 50... but the women will still be in their 20s... and Naked.”

Long dead Versace would have loved to see one of his house’s creations hitting the headlines. He had created “that dress” - the safety pin number that shot Elizabeth Hurley to fame when she accompanied her boyfriend Hugh Grant the premier of Four Weddings and a Funeral back in 1994. The dress had been given as a favour to Hugh Grant, as Hurley later claimed she’d had nothing to wear. Hurley revelled in the scanty thing, majors coughed and spluttered over their gins down at the club and a star was born.

Jennifer Lawrence is no Cinderalla who got to go to the ball, though. She’s the number one actor in Hollywood and one of the highest earners of all time. Millions of teens loved her as brave Katniss Everdeen in The Hunger Games. She’s so cool she could make a tumble on the Oscar stage look like the best thing ever. That’s some power.

Why’s everyone freaking out, my 16 year old says. Jennifer Lawrence can wear what she wants, but is that how she really wants to be dressed on a bitter cold day in London? I doubt it.

Hollywood and fashion have a pact going and stars don’t get to pick their own clothes off stage, no more than they do in the movies. There’s a lovely scene in Joy, a recent film by Lawrence, where,for an appearance on the QVC shopping channel, her character refuses to wear the tight little suit suggested by the studio. Instead, she insists on dressing as herself. There’s no such freedom when it comes to appearing in publicity shots and on the red carpet.

Every shot is a money one, and stars allow themselves to be dressed by designers and jewellers with skin in the game. When Harvey Weinstein was it his most powerful, every actor in town wore Marchesa, the dress label owned by his wife, Georgina Chapman, Jennifer Lawrence included.

Lawrence’s waspish response to the criticism sounds less like an independent woman defending her choice than someone who’s been put on the back foot by a business that doesn’t want its women covering up, whatever the weather.

Recycling, reusing and reimagining rubbish into clothing and accessories
6

Yotam Ottolenghi: how to turn yesterday’s bread into a feast
8

Are almonds bad for the environment?
Real news has value SUBSCRIBE