Jeanne Lanvin finally gets the recognition she deserves

Lanvin’s moment in the spotlight is long overdue, and the modernity of her century-old dresses is extraordinary 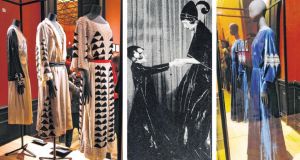 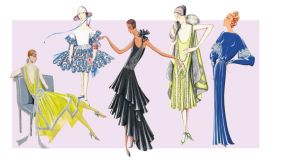 Drawings from Lanvin’s sketch books, which were discovered in the 1980s. Copyright: Lanvin Estate

It might be overshadowed by the dramatic McQueen exhibition that is attracting hordes to the V&A in London, but the first major retrospective of the work of Jeanne Lanvin (1867-1946) at the Galliera palace in Paris, which opened during fashion week, has a shock value all of its own.

The modernity of the century-old dresses is extraordinary, not to speak of the outstanding craftsmanship that became indelibly associated with the French fashion house, now the oldest still in business.

“Like all great designers, Lanvin’s clothes look like nobody else’s. In a sea of beaded 1920s dresses, hers stand out. Her embroideries were never just applied trimming, but an integral part of the overall design and placed with the precision of a brilliant graphic designer,” says designer Peter O’Brien, a long-time Lanvin fan.

Jeanne Lanvin was born in Paris, the eldest of 10 children. Aged 13, she started work as a dressmaker’s errand girl and later trained as a milliner. Five years later, in 1890, through hard graft and determination, she set up her own millinery business. She married an Italian aristocrat she met at Longchamp racecourse, with whom she had a much-loved daughter, Marguerite. The marriage lasted only eight years. Following their divorce, she married again in 1907, to a journalist, thus ending her status as a single parent, which then carried a certain social stigma.

She made beautiful clothes for her daughter, which were light, simple and very different to the watered-down adult styles of the time. They attracted so much attention that she opened a children’s clothes department in 1908, the first of its kind. That was followed a year later by womenswear. From there her business grew to the point where, by 1918, she had nine workshops and three embroidery ateliers and she employed nearly 1,000 people.

She was, in effect, the first lifestyle designer, whose empire expanded to include menswear, bridalwear, home decor, lingerie, furs and the famous fragrance Arpège, which she dedicated to her daughter.

The exhibition contains more than one hundred models selected for their intricate workmanship and embellishment, including a star-spangled swimsuit from 1924. Visitors can see

some of her most famous “robes de style” picture dresses, with their bouffant skirts in silk taffeta, embellished with flounces, petals, lace, ribbons, rosettes and bows. Their small waists and close-fitting bodices, resolutely feminine, flew in the face of then fashionable garçconnes or flappers with their narrow, tubular figures. “Modern clothes need a certain romantic feel,” she once said.

The evening wear, particularly that in black and silver, a favoured combination of hers, is spectacular. So too are the dresses with decorative motifs drawn from China, Turkey and Japan.

Lanvin had an extensive library of art books and was a collector and patron of artists such as Vuillard, Renoir and Redon. Her sense of colour was unmatched, and she invested in her own dyeworks, becoming best known for a shade of blue inspired by a Fra Angelico fresco. For embroideries she used pearls and sequins, but also minute shells, coral, gold and silver threads, ribbons and raffia. Her classic dress shape from the 1920s had slit sides and a loose top with or without sleeves.

In the 1980s more than 500 creations by Lanvin were discovered in trunks, including her daughter’s wedding dress, stage costumes, children’s clothes and countless beaded dresses, plus a complete set of sketch books.

The appointment of the Israeli designer Alber Elbaz as artistic director of Lanvin in 2001 by the company’s new owner, a Chinese businesswoman and publishing magnate, sparked the idea of awakening this “sleeping beauty”, which has resulted in this fine retrospective.

It shines a new light on a designer who founded a business on hard work and her own financial resources, unlike Chanel, who made headlines and whose road to success was paved by a succession of wealthy lovers. “Her moment in the spotlight is long, long overdue,” says O’Brien.