Is Rihanna the Coco Chanel of the 21st century? Louis Vuitton thinks so

The singer and the luxury goods group look set to make a deal – and, possibly, history 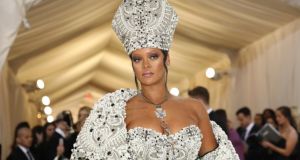 Is Rihanna the Coco Chanel of the 21st century? LVMH Moët Hennessy Louis Vuitton, the parent company of Dior, Givenchy and Fendi, apparently thinks so. It is in the midst of a deal to back her in a fashion brand, making her the first woman designer of colour at the largest luxury conglomerate in the world.

Neither LVMH nor Rihanna would comment on the news, which has been confirmed by sources within the group, but the singer has recently been photographed on the street wearing a “mystery” pair of oversize Fenty-branded square sunglasses hinting at what may be to come.

Although the details of the agreement remain unclear, it is a turning point in both fashion and fame. The combination of Rihanna’s label, Fenty, and LVMH will be the clearest expression yet of how celebrity, social media and influencers have redefined the power balance between culture and consumption, changing the way brands of all kinds relate to their audience.

It is not insignificant that despite the number of well-known and respected designers unemployed in the fashion world, including Alber Elbaz, Stefano Pilati and Peter Copping, the dominant luxury group decided to put its money where a pop star was.

Robin Rihanna Fenty, one of the defining musical artists of the millennium and a multihyphenate talent, has no formal fashion training. What she does have is a clear vision for her own image, a string of hits, 67 million Instagram followers, and an ability to disrupt the status quo.

Now that the elite fashion world is in disarray, splintered by the rise of the street, direct communication and a growing awareness of its lack of diversity, there is little wonder that LVMH would see in Rihanna a potential way forward.

The company first became aware of the power of her base when it signed her to Kendo, its beauty subsidiary, in 2017. The runaway success of Fenty Beauty, premised on addressing a diverse array of skin tones – and which itself already has 6.3 million Instagram followers – astonished the group. The line changed what consumers demanded from their makeup and was named one of Time magazine’s 25 best inventions of 2017.

Discussions began internally at LVMH with Bernard Arnault, the chief executive, about what could happen next. Although the group had had various conversations over the years about building a brand from scratch, it had not done so since Christian Lacroix, in 1987, because of the cost involved. (Lacroix was sold in 2005.) It preferred to buy already established names.

Unlike most new designers, however, Rihanna had a public profile that was as fully formed and global as any heritage brand. She came to the attention of the fashion industry early on, singing at a Gucci fundraiser at the United Nations in 2008, and quickly understood the power of style to magnify her messages and help her transcend the limits of the music world. In 2011 she began working with the stylist Mel Ottenberg, and an adventurous, self-aware style that encompassed looks by emerging designers as well as runway names like Lanvin and Givenchy began to emerge.

In 2014 she was named fashion icon of the year at the Council of Fashion Designers of America awards, where she appeared in a sheer crystal-spangled Adam Selman dress and matching cap, a white fur wrap strategically draped around her body, setting off a so-called naked trend in red-carpet dressing. The next year, at the Met Gala, she wore a giant yellow cape from the Chinese designer Guo Pei and enshrined her skill at making an entrance.

Even though Rihanna became the face of Dior’s Secret Garden scent in 2015 (making her its first black brand ambassador), she never aligned herself with a single brand; they served her purposes rather than the other way around. The fact that she signed a deal with Puma to be its creative director and start her own ready-to-wear brand in 2014, when the sportswear giant was still owned by Kering, an LVMH rival, and for a time worked with both groups simultaneously (an unprecedented arrangement), reflects the shift in status. Suddenly a celebrity could have the upper hand.

Last September she introduced her lingerie collection, Fenty x Savage, at New York Fashion Week, where it made waves for including a wide range of body types and colours. Her ambitions for her brand were perhaps matched only by those of Kanye West, who first made forays into Paris back in 2011, interned for a while at Fendi, and whose Yeezy brand is backed by Adidas.

Other celebrities have made the move into fashion, using the red carpet as a springboard to legitimacy. But what has set them apart, whether it’s Victoria Beckham or Mary-Kate and Ashley Olsen, is that they have done so in part by renouncing their low-culture past and humbly pledging their troth to design.

After all, industry wisdom says that to be a “real” designer, individuals must dedicate themselves to the craft. (Otherwise they are just Jessica Simpson.) Also, those designers started – and remain – small and independent. By contrast, Rihanna, who starred in last summer’s Ocean’s 8, appears to understand how her various platforms and outlets for expression can complement one another, and shows no interest in abandoning any of them. LVMH has presumably not asked her to.

There are still outstanding questions around just what shape her brand will take, where it will be based and how the relationship with LVMH will be structured. Even what it will be named. But what is certain is that Rihanna’s first catwalk show – or extravaganza or concert or whatever it turns out to be – will be appointment viewing far beyond the often insular fashion world. And she now has the potential to set not only style trends but also a trend in what managers, agents, executives and kids thinking about their future imagine is possible.

Last May, as a host of the Met Gala celebrating the show Heavenly Bodies: Fashion and the Catholic Imagination, Rihanna made her entrance in a heavily embroidered Martin Margiela bustier minidress, grand overcoat and mitre, and was crowned on social media as the pope of fashion. From the vantage point of today, it looks like a sign of things to come. – New York Times

How do you get bereaved fathers to talk? Bring a football
9 Cape Crusader
10