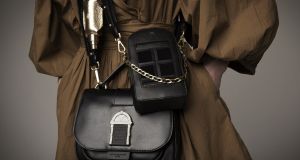 Brendan McEvoy, co-founder of luxury Irish leather bag brand, My Name is Ted, was sitting in his car on Eccles Street in Dublin, when a thought struck him. Doors are like bags. You open and close them and they protect what’s inside. And that’s how his Door Bag womenswear collection started, as a way of paying homage to the most famous door of them all, number 7 Eccles Street, home of Leopold Bloom in Ulysses. Demolished in 1967, and now part of the Mater Private Hospital, the door was salvaged and for several years was displayed in the Bailey pub. That door motif has come to symbolise his brand.

Having launched his first bags in 2015, it has been a year since they were featured in Create at Brown Thomas, “which brought validation”, he says. That followed winning the Best Emerging Designer at Showcase in January 2017. Adaptability and functionality are key for My Name is Ted – messenger bags and briefcases double as backpacks, for example. The latest collection, the Mini Door Bag works for both daywear as a crossbody and for evening as a clutch with a chain top handle.

A design innovation inspired by present times sees the bag turned inside out by incorporating solid brass rings to the shoulder strap, on which you can attach accessories such as hand sanitiser, air pods or small purses so that they are readily accessible, preserving space inside the bag for items such as phones and other essentials. “Why would you rummage in your bag?”, he asks. The bags also feature dual all-round zips with credit card slots integrated on the front panel.

Such studious attention to detail McEvoy attributes to his grandfather, Ted Carbery, who was a saddle maker “who could make anything, from rosary beads and fishing bags to roller skates and satchels”. Carbery was the father of 11 children who lost the use of his right hand after an aneurysm, but through sheer resilience, determination and willpower, managed to adapt from right to left and continue working. The brand is named after him.

Originally McEvoy, a guitarist, had aspirations to be a musician but like Ted, changed direction. Having decided to restart his grandfather’s business in a new way with his wife, Kasia, a lawyer, he diverted his creativity into the enterprise, putting a huge amount of time into research and travel, visiting suppliers and manufacturers in Italy and Spain.

There he sourced the best materials he could find: full-grain Italian leathers, hand-polished solid brass hardware and Italian-suede linings, to fulfil what he calls “our two pillars – uncompromising luxury and practicality and if we can marry the two, we go into production, if not, we don’t. We think about the things people want to put into a bag. We really push standards.”

He sketches the designs at home in Mullingar, Co Westmeath, while all production is carried out in Italy. Fifteen years’ experience in the corporate telecoms industry informed his need to incorporate tech elements, such as power banks, into the bags.

The next collection launching in July will include a weekend bag, a “fit for purpose” man-bag and a new man’s belt, adding further products for men on the move.

“Everything has a function and tells a story. Create was brilliant for business and Covid has been positive for online. We are a digital-first business and place a huge value on strategic flagship retailers like Brown Thomas, but my aim is to be a recognisable, Irish, luxury-goods brand internationally”, he says.

In a very competitive world, that’s a laudably ambitious aspiration, but one of which his grandfather would be proud.