First time award has been won by an Irish designer 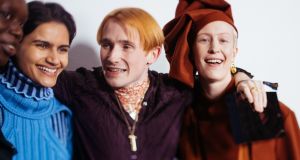 London-based Irish designer Richard Malone has won the 2020 Woolmark Prize worth €124,000 euro “for his outstanding ability to showcase the beauty and versatility of merino wool”.

It is significant international recognition for the Wexford designer and is the first time in the award’s history that it has been won by an Irish designer.

Malone was one of the 10 shortlisted from 300 applicants from 47 countries and who have demonstrated commitment to traceability in the supply chain and sustainability.

Previous winners of the award include Karl Lagerfeld and Yves St Laurent in 1954 and it certainly helped propel their illustrious careers.

Malone’s winning collection will be sold in high-end department stores around the world and will be a big boost for his business.

Malone was overwhelmed when he was announced as winner of the award, which was presented at London Fashion Week. When he worked in Paris for luxury houses, he said it felt unnatural for him to see how fashion is consumed. “I am always aware of the environment coming from a farming place in Ireland,” he said.

His latest collection, shown at London Fashion Week, stressed his multifaceted supply chain from farm to fabric and back again. “Fashion,” he said, “need not only be about consumption, it can also be an example of respectful, fair creation and a means of problem solving.”

The award comes in the wake of letters sent by animal rights group Peta to Malone and Burke urging them to cut ties with the Woolmark brand due to alleged cruelty to sheep in Australia.

Woolmark said in a statement it does not “engage with protest groups” and asserted that Australian woolgrowers “are committed to animal welfare and work closely with credible animal welfare organization such as the Australian Veterinary Association.” It said wool is a 100 per cent natural fibre, biodegradable, renewable and sustainable.

Richard Malone will be speaking in Dublin on Saturday March 21st in Irish Museum of Modern Art, Kilmainham, at an event hosted by Kildare Village along with Sinead Burke and Oriole Cullen, curator at the Victoria and Albert Museum.

Hands hurting from all the handwashing? Here’s how to show them a little TLC
7