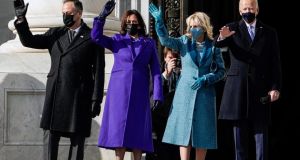 On most US presidents’ inauguration days, the fashion watchers focus on the incoming first lady. Her outfit is not only widely photographed but also preserved at the National Museum of American History, alongside previous FLOTUS’ dresses including those of Michelle Obama, Laura Lane Bush and Jacqueline Kennedy.

Dr Jill Biden stuck to the convention of putting US fashion at the fore, opting for a deep ocean-blue tweed coat and dress by emerging sustainable designer Alexandra O’Neill’s label, Markarian.

Today though, there was another talking point. For some time the fashion world had been guessing what Kamala Harris would wear for the historic moment when she would be sworn in as the US’s first female vice-president. Would she boost an American stalwart designer or shine a spotlight on an up-and-coming creative?

There was speculation also about what new president Joe Biden would wear, and how his and Harris’s choices would reflect their administration’s values. Nothing is an accident at this level of politics; even an outfit is never just an outfit.

Biden and Harris set the tone with conventional, powerful and purposeful choices. They could be read as indicating a more composed governance and regime than that of their predecessors.

Ralph Lauren – a label famous for its classic, All American image – dressed President Biden for the inauguration. The president opted for his signature navy, with a suit and overcoat in the midnight hue, both designed by Ralph Lauren.

Harris herself opted for a purple outfit by young black designer Christopher John Rogers, underscoring her reputation as a symbolic dresser. Harris accessorised the optimistic purple design with her signature pearls. The vice-president chose another black designer, Sergio Hudson, for her evening outfit.

Purple was a colour favoured by the suffragettes and a symbol for bipartisanship as it is red and blue mixed, a symbolism that surely played a part in Harris’s choice.

Today isn’t the only time Harris has opted for inspired clothing interspersed with meaning. Throughout the election campaign, there was a distinct strategy behind her style.

She made another significant style statement at a Covid memorial event in Washington last night, when she chose a camel coat by black-owned business Pyer Moss. The label was founded by Kerry Jean-Raymond, who has pivoted his business to provide PPE and support small businesses during the pandemic.

Harris’s choice of outerwear was respectful, thoughtful and full of empathy. Fashion search platform Lyst noted that, less than 24 hours after Harris wore the camel coat, searches for “Pyer Moss coat” had spiked 734 per cent.

Jill Biden’s purple ensemble for the memorial – an ensemble by independent, sustainable New York designer Jonathan Cohen – also struck a chord, inspiring a 655 per cent demand for the colour purple, with coats the most sought-after item.

Earlier this week, a viral Tik-Tok video showed Harris at home wearing a pink suit and a pair of socks that read “‘The Future is Female”. The white Carolina Herrera suit she wore for her victory speech in November was considered a symbolic nod to the suffragist movement.

Fashion commentators Diet Prada said on their Instagram: “Her eloquence and intellect are echoed in her dress sense, and to come out of the gate in such a powerful statement is giving us a lot to look forward to.”

People look forward to what she is wearing with an engrossment akin to what a celebrity or influencer might attract. There are style websites dedicated to tracking everything she wears.

Her footwear choices have been the subject of countless articles. When she stepped off a plane to tour the California wildfires in a pair of pragmatic Timberland boots, searches for the boots increased 376 per cent in a week, according to Lyst. Her Vogue-cover debut – in which she wore Converse – might have divided opinion, but people are searching for the casual Chuck Taylor shoe on average five times every minute.

Incidentally, President Biden, with his conventional personal style, is also creating a demand for his sartorial signatures. His choices are primarily defined by a controlled aesthetic and dependable American brands; with his deep blue suits and now-iconic Raybans. According to the Times UK, luxury website Matches have reported sales of aviator sunglasses are up.

The visibility of US design on inauguration day contrasted sharply with the “exit look” of outgoing first lady Melania Trump, who chose a sombre all-black outfit consisting of her go-to European labels, for her departure from the White House. She and former president Donald Trump did not attend the inauguration, flying to Florida instead.