‘I was distraught at what fashion had become: corporate, homogenous and top-down’ 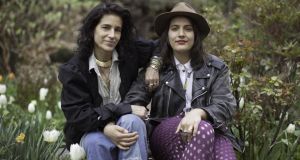 Mother and daughter Elisa Goodkind and Lily Mandelbaum: in a reversal of stereotypes, the mother is racehorse thin with an androgynous Keith Richards type of glamour, while the daughter is curved, with a beautiful face lit up on occasion by Ruby Woo lipstick by Mac. Photograph: Kacie Tomita

The internet has changed everything about the fashion world – hello, online retail – except its propaganda. In fact fashion’s whispered manipulations – buy, buy, buy; be thin, young, white and rich, but never look as if you’re trying – are more conservative and uniform than ever.

Into this strict regime comes StyleLikeU, a website run by mother and daughter Elisa Goodkind and Lily Mandelbaum. In a reversal of stereotypes, the mother is racehorse thin with an androgynous Keith Richards type of glamour, while the daughter is curved, with a beautiful face lit up on occasion by Ruby Woo lipstick by Mac. According to Mandelbaum, in her childhood Goodkind was “definitely the cool mom. She’s way cooler than me and I’m okay with that. I’m the nerdier, easier one.”

The mantras on the StyleLikeU website are effective and you never hear them anywhere else: “Style is not wanting to be somebody else”; “Style is not about money” ; “Be your own editor”; and so on.

The interviews on StyleLikeU are a strange mix of fashion insiders – Goodkind was a stylist for years and worked for Vanity Fair – and New York bohemians. All talk about their bodies and clothes. It is a mark of its good taste and connections that the radical photographer Mary Ellen Mark, who died last month, spoke to StyleLikeU about her lifelong love of clothes, particularly Japanese clothes, in its Ageing section.

Goodkind founded StyleLikeU in 2009 when she went back to work as a stylist. “I saw nothing that inspired me,” she says down the line from New York. “I was really pretty much distraught at what fashion had become: corporate, homogenous and top-down. Those people who did inspire me were not in front of the camera.”

She had been used to the fashion world of the 1980s, “when people could make it without having a lot of money. We didn’t even know what the word ‘brand’ meant. It wasn’t even a word.”

We talk briefly about having been teenagers in the 1970s. “It was awesome and very much formed me,” says Goodkind. “It was free and liberated. We were rebels. We thought people who wore Gucci were icky.”

A little over a year ago, StyleLikeU started its What’s Underneath section, which features women talking as they take off their clothes, down to their bra and knickers. This results in some extraordinary interviews , from Lysa Cooper talking about styling hip-hop artists in the past and touching on racism in fashion – “I couldn’t get clothes for Mary J Blige” – to model Melanie Gaydos talking about having ectodermal dysplasia and a cleft palate.

But the single theme that unites many of the women on What’s Underneath, regardless of age and background, is a history of eating disorders. One woman from a prosperous home casually mentions that she did not have a period between the ages of 17 and 27 because she had starved herself so efficiently.

Mandelbaum chips in: “It’s an epidemic in the culture.” She is more confident now, she says, having seen how people she looks up to have struggled with their own body issues as the result of being formed by a society where you are encouraged to focus so much “on yourself and your self-image. It’s stultifying”.

According to Mandelbaum, these videos are seen by an average of The average views for What's Underneath videos is 123,000+. Melanie Gaydos’s video has been seen by 1.6 million people and a 'What's
Underneath' episode with Meredith Graves of the band Perfect Pussy received 1.5 million. “Our biggest demographic is females between 18 and 25,” says Mandelbaum, who seems to be in charge of these things. She isn’t surprised so many young people watch the site.

“They’re sick of feeling shitty about themselves,” she says. “ It’s a haven for people.” The response from the public is enough to keep her working, she says. People say StyleLikeU has stopped them from taking their own lives. Her dream, she says, is to keep working on this project “until the day I die . . . bringing about a huge change in the culture.”