‘How do you get a bikini body? You just put on a bikini’

It’s holiday season, which means body-image pressures for too many Irish women 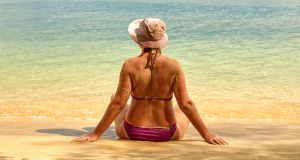 ‘On holiday abroad, especially Europe, I feel far more carefree and relaxed – focused on enjoying my holiday, rather than my wobbly bits.’ Photograph: iStock/Getty

Last week, the 61-year-old Irish author Sheila O’Flanagan tweeted about her intention to buy a bikini for her upcoming holiday, and her followers cheered – because, despite what we are often led to believe, you should never feel too old or too large to enjoy the freedom and feeling of the sun on your skin.

As soon the first spring flowers appear, the annual pressure to achieve the “perfect beach body” begins – blogs, magazine articles, billboards and TV programmes all promise to whip us in to shape so we don’t disgrace ourselves by daring to expose an inch of excess flesh at the seaside.

Whether a new-fangled diet, a simple but astonishingly effective exercise plan or, for those who failed miserably to get in shape, swimwear which works wonders to contain folds of flesh; we are assured we can hit the beach with tauter tummies than last year.

It’s all nonsense, of course, but such constant bombardment of images of the “ideal” woman affects even the most body-confident among us.

Holidaying in Europe, I have often been struck by how little everyone seems to care about how they look on the beach; there is a much healthier attitude about enjoying the sunshine without worrying too much about whether or not your stretch marks are visible.

“Because of the cold weather [in Ireland and the UK], we aren’t used to revealing our bodies, with many of us only doing so to lovers, so it can feel private,” says psychotherapist Stella O’Malley. “We also seem to be very self-deprecating about our bodies and our sex lives.”

Chef and food writer Rozanne Stephens agrees. “I’m from South Africa, where people are very body conscious, so I have certainly felt self-conscious stripping down to a bikini there,” she says. “But on holiday abroad, especially Europe, I feel far more carefree and relaxed – focused on enjoying my holiday, rather than my wobbly bits.”

Ann Doherty has felt body conscious since early childhood, and despite being a healthy size, dreads the summer season.

“Even in early childhood I hated my body,” says the Galway woman. “I was a little chubby – just enough for my parents to say I needed to lose weight for my communion. From my early teens I went through phases of not eating as I was embarrassed about my little extra chub – despite being sporty – and by mid to late teens, I struggled with anorexia and then over-eating, one extreme to another.”

The social care worker, who gave birth 10 months ago, regularly runs half and full marathons and should have no reason to feel embarrassed about her body.

“As a size 12-14, I’m often not even comfortable enough to wear shorts on holiday, so if I strip down to a bikini, I’ll always have something to hand in case I need to walk, sit, stand or even just talk to someone, as I’m constantly paranoid about what people must think about my body in swimwear.”

Fellow Galway woman Maria Han says she doesn’t like when her skin is too pale, but other than that she doesn’t care what people think.

“I’ve spent some time living in mainland Europe and didn’t have any issue wearing a bikini there, as the decent sunshine meant I wasn’t ghostly white,” says the 39-year-old care assistant. “Other than that, I don’t care what anyone else thinks.

“We are body conscious partly due to conditioning, and also due to lack of opportunity to wear swimwear. Another important factor is how women are portrayed in the media. The culture of photo editing has created an unrealistic and unachievable ideal. Women, consciously or unconsciously, are guided by lack of confidence and feelings of inadequacy, because the average woman is rarely represented in women’s magazines or online.”

Just out of her teens, Julie Ryan can relate to this as she “despises” her body and is in constant competition with her friends to look the best.

“I know I’m not fat,” says the 20-year-old, who wears a size 10. “But I want to be thinner, and no matter how much I exercise, I can’t seem to get down that extra dress size. Most of my friends are a size 8.

“We went to Ibiza together last year and I was so miserable, as I was terrified about stripping off in front of the others. I went off for walks rather than going to the beach or pool. I know it is stupid, but having even the smallest bit of extra flesh makes me feel ashamed.”

I am comfortable with my own body, which is by no means ‘perfect’, but women should wear whatever they feel happy and comfortable in. I’m 45 and still wear a bikini

“I went on my first beach holiday when I was 19 and was definitely self-conscious, but I quickly grew out of that and now I really don’t care what people think,” she says.

“I am comfortable with my own body, which is by no means ‘perfect’, but women should wear whatever they feel happy and comfortable in. I’m 45 and still wear a bikini on holiday.”

Sharon Dooley, founder of Ireland’s Got Curves, also would have suffered from body image as a young woman, but says she will not let this way of thinking affect her life any more.

“When someone says how do you get a bikini body, I say, you just put on a bikini,” says the 44-year-old, who has seven children. “This would not have been my answer in my late teens or early 20s; while I never dressed for a man, I always dressed to keep up with other women.

“As I have become older and got bigger, I discovered a whole new meaning to body image, and now I dress for myself. When I see a woman pushing the ‘social barriers’ of body image – which I feel have been imposed on us by other women – I salute them. Why miss out on life because of how we are told we should or shouldn’t look?”

Róisín Ingle: Taylor Swift has guided me through the past decade
8

‘Black Americans and Irish have a lot in common. I feel we’re connected’
10