Holy show: What will the kids be wearing for Communion this year? 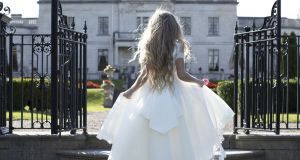 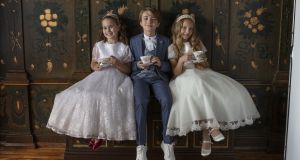 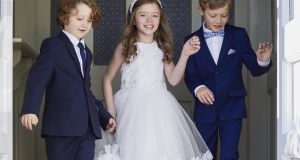 Religious rites of passage in Ireland – like parts of Italy – tend to come with a high secular price. Catholic parents of this year’s Irish holy communicants, an estimated 40,000 children, face the disturbing reality that the average cost of First Holy Communions in this country has risen by 8 per cent to €900, according to a recent Ulster Bank survey.

The amount parents were willing to spend on clothes for their children jumped 35 per cent to €215, according to the research, and the outlay on party food and drink rose to €357, with cash gifts to the child around €617.

“It’s a lot of pressure on families,” says Jenny Erwin, head of children’s fashion in Arnotts. “It’s not just the dress, but the accessories, the shoes, the gloves, the bags, the veils and then the nails, the hair, it’s such a big thing.”

It has got to such a point that there’s a story doing the rounds about one parent who last year rang her local parish priest before the ceremony to say her child was delayed getting her nails done, “so we’re heading straight to the hotel”.

True or not, the Archbishop of Dublin Diarmuid Martin is concerned about the commercialism of the religious event (he noted a dress for €800, and the cost of marquees for parties), and is now endorsing an approach that will see the primary responsibility for sacramental preparation shift from schools to parishes.

In the meantime, for little girls, the opportunity to dress up for the first time for the church ceremony has its own demands and thrills, and a floor length white dress embellished with pearls, lace and diamonds is currently winning hearts. It’s the most popular style of choice, whether it is a €100 polyester affair by Paul Costelloe from Dunnes Stores, an elaborate bonded lace creation from Arnotts by Laura D (an Irish company and made in Kimmage), an item from The Sisters warehouse in Tallaght, an expensive Spanish number from Marian Gale or simply a hand-me-down from an older sister.

Lidl’s budget range launched last year with all dresses €35.99 has not been continued.

“Little girls are drawn to sparkly dresses and want to look like princesses,” says Erwin, who has years of experience selling Communion wear. “The trend for short, ballerina-style dresses has gone away and now it’s all about full, long dresses – we have extra underskirts to make them even fuller,” she adds, splaying a dress on the floor showing how it almost stands on its own. Arnotts, a traditional destination for Communion attire, offers 42 different dress styles in sizes from 24 up to 34XX from four brands, Isabella, Koko, Celebrations and Laura D. They range in price from €220, with the average spend between €300-€400.

Boys are more casual and can wear chinos with their blazers for Holy Communion. “It’s an even mix of suiting and casual wear, though every little boy wants a waistcoat and they are often influenced by their dads,” adds Erwin, who hangs around churches keeping a watchful eye on what’s being worn. She spends up to three days analysing each dress to see what body shape it suits.

So for 2020, dresses are clean and crisp with no spaghetti straps or low tops. Veils often come with a cross at the back (that’s for granny, according to Erwin), “and there is a lot more lace than in recent years. At the end of the day, it’s pearls, lace and diamonds, that’s what they want,” she says.

The more the British learn about Ireland’s loyalists, the less they like
4