Greening the runway: Ireland’s fashion loss is the UK’s gain 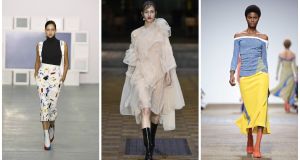 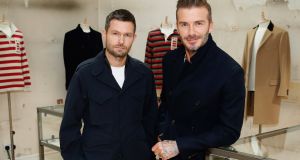 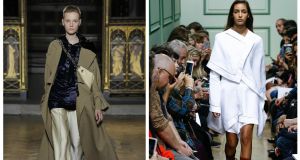 When it comes to fashion, Ireland’s loss is the UK’s gain. We export some of our best talents abroad to a country which values the industry and its £28 billion (€33 billion) worth to the economy, and gives it the support and opportunities notably lacking in Ireland.

Opening London Fashion Week, British prime minister Theresa May spoke about her government’s commitment to apprentices – the future of fashion – and said it would “do everything we can to provide the right investment in training and skills . . . to go as far as their talents can take them”.

Some of the biggest stars at London Fashion Week this season were Irish designers. They included Simone Rocha, whose name is now international; J.W.Anderson who not only runs his own brand employing 55 people, but is also creative head of Spanish luxury label, Loewe; and Dubliner Daniel Kearns, the talented menswear designer who collaborates with David Beckham on the revival of the legendary Savile Row brand Kent & Curwen.

Adding to the mix is Richard Malone from Wexford whose work has been nominated for London’s Design Museum, a singular honour for the young designer given that previous nominees include Dior and Prada. Then there is Teatum Jones, of west of Ireland origin, who won the International Woolmark prize this year with a collection inspired by Foxford Woollen Mills.

Elsewhere during fashion week, Paul Costelloe revisited Irish linen, while Sharon Wauchob from Newtownstewart made her London debut after years showing in Paris. Absent from London this season was Ireland’s most successful designer Orla Kiely, who staged her show in New York in her new shop on Bleecker Street.

JW Anderson’s show in Yeomanry House was attended by his mother Heather and sister Chloe both sporting leather handbags with silver JWA buckles. Notable was Anderson’s inventive use of linen including a dress made of white napkins.

“Why wouldn’t he use linen?” commented his mother after the show. “Sure, he’s an Irish designer.”

Teatum Jones looked to Scotland for patterns from Charles Rennie Mackintosh’s romantic watercolour paintings, mixing them with the visual geometry of laser lights in Galwegian clubs (Una Burke has designed belts for the brand.)

Richard Malone, showing in Old Spitalfields Market, kept to his familiar aesthetic with sporty and striped stretchy knits and contoured pinafores with a palette of yellow, blue and orange. His clothes are now sold all over the world.

Danny Kearns’ revamp of Kent & Curwen in partnership with David Beckham is bound to be a winner when it makes its debut on designer shopping site Mr Porter in November.

At a private viewing in Mayfair, Beckham paid tribute to Kearns saying “he understands how men want to dress in general”. The handsome pieces include a cotton military greatcoat, a tartan overshirt, a waxed cotton hunting jacket and a peacoat, all of which will find their way to Brown Thomas early next year.

“It’s about making them relevant to today,” said Kearns.