Her soccer career may be over, but Hayden Cassidy is top of the game in male grooming 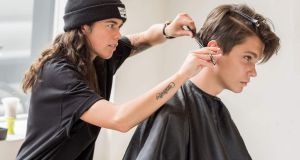 She wields a deft hand with the clippers and drives an open razor on a cutthroat shave with skill and alacrity. Though only 26, London-based Dubliner Hayden Cassidy has become one of the most successful female barbers, an international superstar. She has travelled the world, cutting, shaving, demonstrating and educating and has clocked up more than 90,000 followers on Instagram.

This, however, wasn’t the dream career that she had always cherished. As a young teenager, all Cassidy ever thought about was soccer and playing that sport professionally was her sole ambition all the way through school at Mount Temple on the Malahide Road, in Dublin.

At 18, she won a soccer scholarship to Georgia in the US when tragedy struck, and those dreams were shattered. “I broke my leg in a tackle, a really bad tackle and had to have five operations in the States,” she recalls. Her leg never completely recovered though she is able to walk but training three times a day as she had been doing was now out of the question.

“I was lost when I came back [to Ireland] and uncertain what to do. I didn’t want to go back to university where I was studying psychology, so I started teaching dance and hip hop to kids from three to 16. I was able to teach younger kids because it was not so strenuous.”

Invited by an instructor friend who cut hair at home to have a try, she suddenly found it was something she could do well having often styled her brother’s hair. “That was six years ago and there weren’t any female barbers in Ireland at the time and there was nothing glamorous about it. But I reckoned that having a craft like that I could travel, so I went to TK Maxx, got a pair of clippers and started cutting hair.

“I asked Cut & Sew [in Temple Bar] if I could have a position as a junior barber – they had never seen a female barber but after two months, I was allowed to cut.” (Owner Sean Bryan known, for his fade to zero cut, popular with young hipsters, now has four shops in Dublin.)

After that, Cassidy moved to Berlin to work with Nomad Barber, a world-class barber who specialises in old school shaves. “It opened my eyes more to the world of barbering. I wanted to push things more and from there I started teaching and later worked for an afro barber in Berlin, where my German improved because clients were international – guys from Ghana, Nigeria, Poland. It really pushed my skill sets.”

An opportunity to go to LA to a hair show notched up another peg in her career when Andis Clippers, one of the biggest brands in America, spotted her and she became one of its top educators. For somebody who had only three years training up against others with up to 15 years, it was a coup.

“That opened the door for me. From there I got to teach and showcase in Brazil, was the first female barber in Indonesia, Russia and I went all over Europe, the US and Canada. An average month would see me working in a barber’s shop for two or three days and at the weekend I would get a flight to somewhere to teach a course. I was going to three or four places every four weeks,” she says.

“Cutting men’s hair is far more visual as the hair is shorter. So, if you make a mistake you see it quicker whereas with women any mistake can be covered by a blow dry. The atmosphere in barbers is different and I am more comfortable there than in a hairdresser and am used to the banter.

“Techniques are different – we use clippers and do shaves on the face. The best place for a good cut for a female is a barber shop; it’s normal to have a mix of clients now.”

Some of her high-profile clients include Irish singer/songwriter Dermot Kennedy, Jack Garratt, Halsey and the magician Dynamo. “My style is clean and tidy; I am someone who can do everything in terms of men’s grooming.”

Her tool kit, which includes her £100 clippers with five or six of them in her set, and her £400 Dyson hair dryer “with which you can work wonders”, testifies to the craft being an expensive one.

As for current trends, she reckons that “it is going back to longer, textured lengths, though the fade [zero on the side and fades up to the top of the head] is the most common. You will always get references to David Beckham and other footballers. He recently shaved his head and already has started a trend.”

The hardest hair to cut is Asian hair “because it is straight and thick, but I trained on it, so when I came to softer textures, it was easy for me. Different textures excite me because the end result will be more rewarding. A lot of people think I am a hairdresser and not a barber, so you do get the odd comment, but it is about being confident and people trust me.

“I am now up there with the top five barbers that showcase in the industry and have been to more places in the world than many; every country in Europe,” she adds with pride.

The current crisis, however, has meant the cancellation of many trips, but to make up for that she is increasing the number of demonstrations and tutorials on social media “and keeping busy”.

Planning a move to Australia? Here’s everything you need to know
6