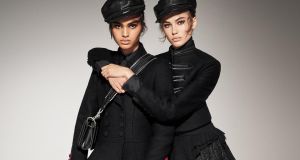 Whatever they’re called – butcher or baker – those flat caps with a peaked brim and fuller top have become a significant fashion trend on the runway, the red carpet and now on the street.

Peaky Blinders, whose fourth season just opened on BBC2 this week (November 15th) with Cillian Murphy playing gang leader Tommy Shelby, only serves to accentuate what was common working class men’s headwear in the early 20th century. Now it’s superstar model Bella Hadid sporting it with everything from cutaway sleeved tops to jeans and fatigues, Rita Ora on the red carpet teaming it with a sexy black suit while on the catwalk Prada, Miu Miu and John Galliano add to its cool girl status. This is Zara’s take on the trend.

Irish firefighters are getting into fashion, but in a different way. Three members of the Dublin Fire Brigade who formerly worked in graphic design, retail consultancy and sustainable development and who love the sea are the collective force behind Grown, a new Irish ethical label which they call a “challenger” brand.

They have created a range of organic, eco-friendly cotton tees, shirts and sweatshirts (made in Fair Trade factories using wind and solar power) along with a campaign called tree4tee in which one indigenous Irish tree will be planted for each piece made; to date they have planted 700. Their passion is the Irish coastline, their goal to protect the ocean and their aim is “for people to buy a tree not a tee”. Visit www.grown.ie