The world of haute couture has finally seen that trainers are beautiful. We could have told them that 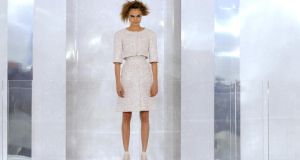 The shock piece at Paris Fashion Week: Haute Couture did not come from the collection of revived surrealist Elsa Schiaparelli, nor from Donatella Versace, with her pop-themed tattoo tops and rope-tight bodices. It came from something we already knew could work – trainers – reinvented by Karl Lagerfeld, for very rich people.

At his Chanel show in the Grand Palais, 65 models in Mohican wigs and made up in glitter wore athlete’s shoes that were firm and foamy, and girl, did they go down well. They gave a walk-to-work, gamine-like bearing to the waifs in A-line skirts, boleros and shift dresses, which were exquisitely crafted.

So were the shoes, made in Massaro’s atelier and stitched with tweed and metallic thread in pastel colours, with chiffon laces. They will cost the buyer of bespoke couture about €3,000.

It took just one girl to say she hated heels. Lagerfield made the shoes for his leading lady in the show, Cara Delevingne. The 21-year-old muse is fun and subversive. Her signature is to turn the world’s gaze on its head and take selfies, pulling ugly faces and putting them on Instagram. During September’s haute couture week she was chased like a street urchin by the paparazzi, between taking selfies and yelling “it’s too much”.

High street theft
So this time the fashion world has cogged from the high street to show us a good thing: trainers are comfortable, and we can move in them.

We knew that all along, but Lagerfeld’s minions constructed stairways on the revolving stage to help explain it.

The girls’ faces were smirking, in accordance with the brief. The walk was different: there was spring and hope instead of the usual fatalistic tread. Compared to other shows, it was remarkable. Bouchra Jarrar, the newest blood in Paris couture, had her girls in formidable trousers, but they looked less self-assured as they stomped, clacking, spearing the marble floors rather than buoyantly crossing them.

The trainers are probably a stunt. They certainly aren’t feminist, as they formed part of a spectacle that reintroduced the corset. But the runway can hold a mirror to our own walks (and Lagerfeld’s gleaming white floors were uber-reflective). We use heels to bolster our height, and there’s nothing wrong with a taut calf, but it’s no longer among the dictates.

Tall shoes outmoded?
Steps have been made towards outmoding the punitive tall shoe. In the summer, Ariana Huffington told this newspaper that “there must be something about our sense of ourselves that we don’t feel adequate, except in high heels.”

We are still somewhat conservative. How many of us have to drag an extra pair of shoes with us to work, or got excited by roll-up ballerina pumps? Taking out our clandestine flats at a wedding saves us from pain, but it is just another layer of complication to unwrap.

Alexa Chung really made something of the brogue, and Simone Rocha’s clunking midi-heels offer a solution to the style-versus-life conundrum. Christian Dior put his models in slip-ons, and Elle Macpherson, who designed plumed sandals for Schiaparelli, said she adored flat shoes.

On the Rue de Rivoli in Paris, girls wear Campers with their tea dresses and look relaxed. There are options for the free spirit in us that trips from day to night as if it were always midsummer. The trainer, or runner to many of us, is a beautiful thing.

Will sparkly trainers be the next backpack and beanie hat? The forecast is for more loose, bright and playful looks for 2014, and this should extend to footwear.

The first test will be the Oscars in March, when the influence of Paris’s spring-summer offerings is often tested.

Hopefully the call for comfort and healthy limbs will not fall on deaf ears in the real world.